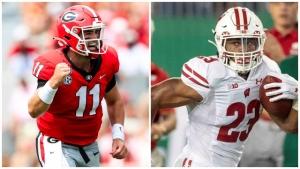 
You might not want to leave the couch this weekend. Week 4 of the 2019 college football season has a ridiculously great slate of games that’s highlighted by Georgia vs. Notre Dame. Check out our preview of the top games, what to watch out for and rankings below.

There are three FBS games between ranked teams — and they’re on at different times.

This was looking like a bigger game…then USC lost to BYU on the road last week. But this is still an important conference road game for the Utes, who have moved into the top 10 of the AP Poll for the first time since the 2015 season. The suffocating Utah defense is allowing only 239.3 yards per game and is now ready to go after freshman QB Kedon Slovis. Utah has lost eight in a row to USC in Los Angeles. It last won in L.A. in 1916.

WEEK 4 SCHEDULE: Times and TV information for every game

This might be a tricky one for Boise State. Two weeks ago, the Broncos beat Marshall by only a touchdown. Now they get 2-0 Air Force, which just beat Colorado on the road in overtime. The Blue Turf has been a house of nightmares for visiting teams, but the Falcons did upset the Broncos in 2015. Boise State QB Hank Bachmeier has 927 passing yards already, but he’s thrown an interception in all three games.

The Vols were a mess through two weeks, losing a pair of home games to Georgia State and BYU before beating FCS Chattanooga. Though Florida has also won 13 of the last 14 in the series, this is also the first start for Kyle Trask. Taking over for the injured Feleipe Franks, Trask went 9-for-13 with 126 yards to beat Kentucky. Getting to make his first start in The Swamp will surely help.

This is Wisconsin’s first of three games against Big Ten East contenders, as Michigan State and Ohio State are still to come. The Badgers are outscoring teams 111-0 through their first two games, while Michigan didn’t look all that dominant against Middle Tennessee or Army. However, Michigan’s 25 point-win last year was the largest defeat for Badgers coach Paul Chryst. Another Wolverines win would temporarily quell doubts about this year’s Michigan team.

Auburn freshman QB Bo Nix has his first road test of the season. He beat Oregon late in Arlington, Texas, but playing in College Station is something else. The Tigers have won two in a row against the Aggies, who are playing their second top-10 team this season. The first one, a loss to No. 1 Clemson, didn’t go their way. A&M probably feels more confident in this one.

As dominant as the Bison look (again), the streak has to end at some point…right? North Dakota State has opened with blowout wins against Butler, North Dakota and Delaware. UC Davis is ranked No. 4 in the FCS Coaches Poll, but this one is in Fargo. First-year NDSU starting QB Trey Lance has 542 passing yards and 234 rushing yards in three games.

UCF is slowly moving toward the top 10. The Knights are up two spots this week after routing Stanford (up 31 at halftime). Freshman QB Dillon Gabriel threw for 347 yards and four touchdowns as UCF scored at least 30 points for the 29th consecutive game. The Knights beat Pitt by 31 last year, though the Panthers lost to rival Penn State by only a touchdown in Week 3.

For the second week in a row, a ranked Pac-12 team plays at LaVell Edwards Stadium. USC lost in its quest, though Washington might be a tougher out. A year ago, Washington beat BYU 35-7 in a top 25 matchup. Huskies QB Jacob Eason (773 yards, 7 TDs this season) and BYU QB Zach Wilson make this one to watch.

After a disappointing 7-6 season in 2018, the Horned Frogs are back in the top 25 going into the 99th meeting in this rivalry. TCU dominated the line of scrimmage at Purdue, running for 346 yards to Purdue’s 23. This is also the final nonconference game for TCU, which opens Big 12 play next week against Kansas. SMU is averaging 550 yards per game in its 3-0 start.

While Big 12 talk has mostly been about the Texas-LSU thriller, OU QB Jalen Hurts and Kansas ending its nearly 11-year Power 5 road losing streak, Oklahoma State has quietly started 3-0. To the surprise of no one, the Cowboys are doing it because of their offense, led by Spencer Sanders’ 622 passing yards and Chuba Hubbard’s 521 rushing yards. But Texas is more than capable of winning a shootout.

Here’s the game of the week and of the season (so far). Two years ago, Georgia brought a ton of fans with it and left South Bend with a win. Now Notre Dame must try to beat the Bulldogs in Athens. UGA hasn’t lost at home since Nov. 26, 2016, to Georgia Tech. If Georgia stars Jake Fromm and D’Andre Swift do what’s expected, can the Irish keep pace?

The 3-0 Aztecs have a great defense (allowing 8 points per game), but Utah State has QB Jordan Love. He’s completing nearly 71 percent of his passes and has 710 yards through only two games. San Diego State does have history on its side, as the Aztecs have won 10 in a row in the series. The Aggies haven’t won since 1967.

College football Week 4 preview: What to watch out for, big questions

Which teams will make a statement on Prove-it Saturday?

Notre Dame made the CFP last year, but it’s had some brutal high-profile losses recently: by 27 to Clemson in 2018, by 33 to Miami in 2017, by 16 to Ohio State in 2015 and the still-must-be-mentioned 42-14 drubbing to Alabama in the 2013 BCS National Championship Game (2012 season). Sure, there have been two bowl wins against LSU, but an Irish win AT Georgia would really quiet negativity surrounding Notre Dame and big games.

As for Auburn, the Tigers are still riding high from the Week 1 thriller against Oregon that vaulted them into the top 10. But winning on the road in conference play would further cement Auburn’s hopes of joining the Alabama-LSU mix in the SEC West.

Finally, Michigan has dealt with seemingly endless questions about its offense after the Wolverines needed two overtimes to beat Army at home. Beating a ranked Wisconsin team at Camp Randall would put a halt to the growing belief that the Big Ten East belongs to Ohio State again.

UNDEFEATED TRACKER: All the remaining unbeaten teams in 2019

How high can UCF really go in the polls?

UCF did everything it had to and more against Stanford. The Knights led by 31 at the half and won easily, 45-27. Their offense again looks like one of the best in the country. UCF has another opportunity this weekend when it plays at ACC foe Pitt. Thanks to the Stanford rout, UCF moved up two spots to No. 15 even though the two teams it jumped (Oregon and Texas A&M) didn’t lose in Week 3. Could the perception finally be changing — could UCF really make a CFP run?

Here’s the hard part. Even with wins against Pac-12 and ACC teams and against possibly ranked AAC teams down the road, UCF will always be confronted with the schedule strength question. So any close win could really hurt it in the polls. Last year, UCF dropped two spots to No. 11 after beating Temple by 12. And despite going a combined 28-1 since the start of the 2017 season, the Knights never played a game ranked higher than No. 7 (finished No. 6 after beating Auburn in the Peach Bowl to end the 2017 season). Obviously the magic number for the CFP is No. 4. Unless there’s a huge number of two-loss teams, that might be too high of a ceiling to crash.

Sunday red just doesn’t have the same effect on Saturdays in the Bounce House 😬 pic.twitter.com/TqnVDWk8Su

Keeping track of the unranked-over-ranked upsets

Here are the ones to watch in Week 4: