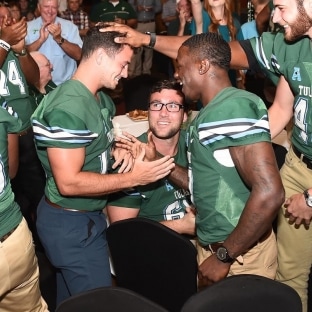 Hey @B_Newman17 how do you feel about not having to pay for school anymore?

Newman suffered a season-ending injury in the fall in 2017, but made a strong recovery and returned to full action in the spring where he shined, earning high praise from the Green Wave coaching staff. Off the field, Newman is a two-time member of the 3.0 club and the American Athletic Conference All-Academic Team. He also makes a strong impact in the community and has been nominated for the Allstate Sugar Bowl Goodworks Team.

The Houston native came to Tulane after he spent two seasons at Hillsdale College.

That moment when you call your dad to tell him you’ve been awarded a scholarship for your senior year:

In high school, Newman four-year letterman at St. Pius X High School for coaches Blake Ware and Jason Kimball where he played wide receiver. As a senior, Newman posted 66 receptions for 1,119 yards and 14 touchdowns as a senior, earning the Houston Touchdown Club Offensive Player of the Year honors.