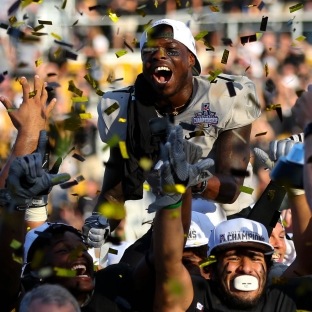 College football: These six Group of Five teams should be among the nation's best in 2018


UCF is trying to follow up on its undefeated season with a new coach, a new defensive cornerstone and the same old high expectations.

The Knights head the list of Group of Five teams with reason for optimism this season.

UCF lost its coach when the lure of his alma mater prompted Scott Frost to return to Nebraska, though he stuck around long enough to coach the Knights in a Peach Bowl victory over Auburn. The Knights also must replace American Athletic Conference defensive player of the year Shaquem Griffin, who was drafted by the Seattle Seahawks in the fifth round.

They still have plenty of firepower. New coach and former Missouri offensive coordinator Josh Heupel inherits a group that includes star quarterback McKenzie Milton, who is making sure the Knights enter this season with the right attitude.

“Say you come off a winning year, teams might tend to get lackadaisical in the way they approach things,” Milton said. “They might get complacent. That can’t be us. We caught some teams off guard in the way we played, the way we won last year. We’re not going to catch anybody off guard now. We’re going to get everybody’s best shot.”

The Group of Five refers to conferences that aren’t part of the Power Five (the Atlantic Coast Conference, Big Ten, Big 12, Pac-12 and Southeastern Conference). It includes Conference USA, the MAC, the Mountain West and the Sun Belt, as well as the American Athletic Conference.

Here’s a breakdown of top teams in each Group of Five conference heading into the season:

Notes: The Red Wolves have earned at least a share of the Sun Belt title five of the last seven years and are the preseason pick to win it again. Arkansas State had six first-team preseason all-Sun Belt selections and quarterback Justice Hansen was named preseason offensive player of the year. Arkansas State went 7-5 last season and lost the Camellia Bowl in its seventh straight bowl appearance. Other Sun Belt teams to watch include defending co-champions Appalachian State and Troy.

Day 1 is in the books and we can’t wait to get back out there and outwork the competition. #BEST #WolvesUp pic.twitter.com/mQrOnFJpZa

Notes: MWC preseason offensive player of the year Brett Rypien has thrown for 9,876 yards, the highest total of any active Football Bowl Subdivision player. The Broncos also return Alexander Mattison, who ran for 1,086 yards and 12 touchdowns last season as Boise State went 11-3 with an MWC title and a Las Vegas Bowl victory over Oregon. Boise State beat Fresno State in last season’s MWC championship game, and those two teams figure to face off for the title again this year.

Notes: UCF owns a 13-game winning streak after ending last season as the lone unbeaten FBS team. UCF returns much of its offense from last season and is led by quarterback Milton, who finished eighth in the Heisman Trophy balloting last year. UCF figures to battle in-state rival South Florida for the East Division crown. The Knights’ nonconference schedule includes a trip to North Carolina and home dates with Florida Atlantic and Pittsburgh.

Notes: Lane Kiffin orchestrated a remarkable turnaround at Florida Atlantic last season. FAU went from 3-9 in 2016 to 11-3 in 2017 and closed the year on a 10-game winning streak that included a Conference USA title and Boca Raton Bowl victory. Florida Atlantic has Conference USA’s preseason offensive player of the year (running back Devin Singletary) and defensive player of the year (linebacker Azeez Al-Shaair). The schedule includes trips to Oklahoma and UCF.

Notes: We’ve included two teams from the American, which has emerged as the strongest of the Group of Five leagues. Memphis loses star quarterback Riley Ferguson and receiver Anthony Miller from a team that went 10-3 last season, but Darrell Henderson is back after rushing for 1,154 yards and nine touchdowns a year ago. The Tigers figure to battle Houston and Navy for the West Division title. Memphis has only one game against a Power Five opponent, an Oct. 20 trip to Missouri.

Notes: Although Ohio has reached a bowl game eight of the last nine seasons, the Bobcats haven’t won a MAC title since 1968. This could be the year. Ohio went 9-4 and won the Bahamas Bowl last year with an offense that averaged 37.4 points. Quarterback Nathan Rourke rushed for 21 touchdowns last season, while running back A.J. Ouellette ran for over 1,000 yards. Ohio and Northern Illinois look like the MAC’s top teams.