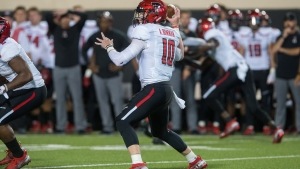 
Kliff Kingsbury was in a jovial mood Sunday night.

Texas Tech’s sixth-year head coach had plenty to smile about following a 41-17 rout of then No. 15 Oklahoma State in Big 12 play a day prior in Stillwater, Okla.

The important word being “then.”

Following the victory — which gave the scarlet and black squad its first road triumph against the Cowboys since 2001 — the Red Raiders garnered the No. 25 spot, to go along with knocking out OSU, in the Associated Press Top 25 college football poll released Sunday.

How ‘bout those @TexasTechFB Red Raiders?

DO NOT miss a chance to see them in action, starting next Saturday! Get your Power Pack tonight!

The latest ranking did not garner much comment from Kingsbury, who continued to harp that his coaching staff and players are continuing to improve each week.

“I don’t think so,” said Kingsbury, who has guided Texas Tech to a 3-1 overall and 2-1 conference mark. “I think it’s more: we’re trying to get better this week. That’s what we’ve focused on all year and, so far, we’ve progressed. Started out very poorly and got embarrassed that first week. And it was a wake up call. And guys had to build from there. That’s how you’d hope they’d respond. And we have to keep doing that.”

It marked the first time Texas Tech was ranked since Oct. 8 of last year. The Red Raiders came in at No. 23 after a victory at Kansas. Tech is also receiving votes in the Amway Coaches poll conducted by USA Today.

Texas Tech, which held the Cowboys to a season low in points scored, is scheduled to host No. 12 West Virginia at 11 a.m. Saturday at Jones AT&T Stadium.

“It was a great team effort,” Kingsbury said of his defense. “I think those guys stepped up. To shut them out in the second half is a huge accomplishment. … Hopefully, we can build off that and that’s a step in the right direction for that group.”

A day after the victory, a few things changed from the final box score.

Texas Tech was assessed four penalties for 25 yards — up from three for 20.

Red Raiders fans may notice Kingsbury displaying a new look, allowing his facial hair to grow more than he’d like.

Four hours before kickoff on Sept. 29, head over to the largest student tailgate on campus, RaiderGate! Reserve your space at https://t.co/sPrwjEW9gG starting Sept. 24. The tailgate is located at the R-1 Parking Lot. pic.twitter.com/EzA9raijfI

The Texas Tech coach admitted he’s not going to mess with a good thing, meaning he’ll continue to let his winning streak beard to develop. He even added wanting Cody, the backup horse which replaced the injured Fearless Champion, to lead out the Red Raiders when they host No. 12 West Virginia this weekend.

“Whatever it takes,” Kingsbury said, cracking a smile. “We’re going to keep things pretty consistent. Anytime you get on a little streak, you like to do that. Definitely have the beard and the back-up horse.”

To the best fans in college football, can’t wait to see you tomorrow!! #WreckEm pic.twitter.com/Ojs25o1TMK

This article is written by Carlos Silva Jr. from Lubbock Avalanche-Journal, Texas and was legally licensed via the Tribune Content Agency through the NewsCred publisher network. Please direct all licensing questions to legal@newscred.com.