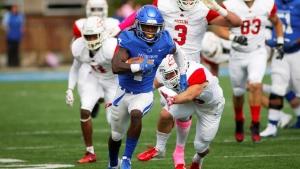 
What a week for the DII football top 25. Only one team lost, and that was No. 25 Virginia Union, who had the unfortunate task of taking on the red-hot No. 15-ranked Bowie State Bulldogs.

All in all, the top 25 scored 1,026 combined points, beating their opponents by an average of 29 points per win. Surprisingly, No. 1 Valdosta State had one of the tightest matchups all weekend, needing all 60 minutes to put away unranked North Greenville, 20-15.

Before we break down this week’s poll ahead of the first Super Region rankings, let’s take a look at the top 25:

We will get a first look at how the four Super Regions look later on Monday, but the utter domination by the top 25 shouldn’t lead to too many surprises. The four No. 1 seeds should be relatively easy to project — right now at least — although Super Region 4 has two teams making strong cases (here are my projections if you’re curious).

Super Region 1 could see Notre Dame (OH) hold onto the No. 1 seed it had in last year’s DII football championship. Slippery Rock also has a say in matters here, with an impressive top-25 victory over Indiana (Pa) earlier this season. The Falcons have been a top-six team in the rankings all season, and that could be enough to get them No.1, for now.

THE 2019 BRACKET: The new format for the DII football championship, explained

Despite the narrow victory in Week 8, Super Region 2 is a no-brainer. Valdosta State has won 23 in a row and the reigning champs should have little trouble earning the top spot here.

Super Region 3 should see the Blazers’ counterpart in last year’s DII football championship game at No. 1. Ferris State is rolling, looking more comfortable now with a healthy Jayru Campbell under center. The Bulldogs have been No. 2 all season in the poll.

Super Region 4 was a tough one, as there is a 1A and 1B here. Minnesota State has been utterly dominant of late, scoring an insane 155 points over the past two weeks. Tarleton State has defeated two top 25 teams by double-digits over the past four weeks. Either team could earn the No. 1 spot and be well deserving.

Here’s why the Super Region rankings can change next week

We have quite the weekend of matchups for the top 25 ahead. These games could impact the second Super Region rankings by next Monday.

Kutztown and West Chester battle in a pivotal showdown for PSAC East Division supremacy. A Kutztown win could lock up a spot in the PSAC championship game on Nov. 16, while a Golden Rams victory will lead to a wild finish with Shepherd coming on strong.

Notre Dame (OH) will be put to the test against Frostburg State. Frostburg State has shown little trouble adjusting to its first year of DII football and has won seven games in a row, dropping 42 points in each of its last two games. The Falcons head to unfamiliar territory to try to protect their undefeated season.

Wingate and Lenoir-Rhyne battle for the South Atlantic Conference in one of three DII football showcase games this weekend. Both teams are undefeated, with the winner essentially having first dibs on the 2019 conference title.

The Great American Conference has three ranked football teams, but Ouachita Baptist will have its hands full with the best one not in the top 25. Southern Arkansas is 7-1 and was blanked earlier this season by Harding. The Muleriders will be looking for a big signature win to prove they belong in the Super Region 3 conversation.

West Texas A&M is on the outside looking in for the Lone Star Conference, but it doesn’t diminish the Buffs strong season so far. Texas A&M-Commerce has to be careful in this big LSC showdown looking to keep pace in a Super Region 4 with very little room for error.

UNDEFEATED TRACKER: Follow all 14 perfect teams, and what they have left

Take a look at the top 25 action coming up Saturday.

How the DII conferences fared in the top 25

With Truman State the lone newcomer, only the Great Lakes Valley Conference saw some movement this week, joining a second team to its ranks. The PSAC is still the leading conference, with four teams represented in the top 25.

Here’s how the conferences break down in the latest rankings.