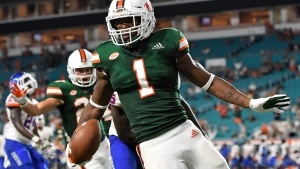 
The third AP poll of the year was released Sunday, and though there was some shuffling, every team that sat in the Top 10 last week is still there.

It’s the calm before the storm, as Week 3 is the last week before most intraconference games begin. But there was still plenty to learn from the latest rankings.

Here’s our breakdown of the latest AP Top 25.

106 — Separate weeks that Alabama has been ranked No. 1 in the AP Top 25. That’s a record for the 82-year-old poll, passing Ohio State. There’s a good chance that number only increases this season.

77 points — The margin in No. 22 Miami’s win against Savannah State, good for the largest differential for a ranked team this week (and season). The Hurricanes didn’t score until 3:57 left in the first quarter, and only had 28 points at halftime. But Miami managed to score 10 offensive touchdowns on just 494 yards of offense. That’s efficient.

21-4 — Record for ranked teams in Week 2, winning by an average score of 41-12. Of those four losses, two were to unranked opponents, as Arizona State defeated No. 15 Michigan State 16-13 and Kentucky took down No. 25 Florida 27-16. That makes three Top 25 losses to unranked teams this year.

18 — Teams that won by three scores or more. Four of those (Miami, Boise State, Auburn, Alabama) won by at least 50 points. Expect a little more parity when conference schedules start to heat up next week.

7 — Conferences represented (not including independent No. 8 Notre Dame). The teams are fairly evenly spread out in Week 3, with five schools from the SEC, Big Ten, and Pac-12 each. By weighting the teams inversely to their rankings (i.e., No. 25 is worth 1 point, No. 1 is worth 25 points, etc.), the SEC comes out on top, helped by being the only conference with three teams in the Top 10.

28 — Teams that have been ranked in the Top 25 through three polls this year. This week, Arizona State made its first appearance after knocking off No. 15 Michigan State, and Oklahoma State entered after winning its first two games by a combined 83 points.

10 — Largest drop this week, via Michigan State, which fell to No. 25 after losing to Arizona State.

3 — Games decided by one possession or less. All three of those games were against unranked opponents (Notre Dame’s 24-16 win over Ball State; Clemson’s 28-26 win over Texas A&M; Michigan State’s 16-13 loss to Arizona State). The average margin for each of the 23 games involving ranked teams last week was 34.2 points.