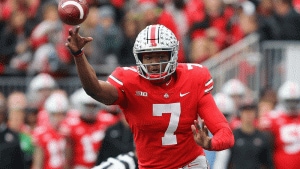 The final College Football Playoff rankings will be announced on Sunday, Dec. 2. Below, we predict how the last Top 25 CFP rankings will look on selection day.

If Ohio State beats Northwestern and Oklahoma defeats Texas, there will be debate over what could be the final playoff spot. But Georgia could upset No. 1 Alabama and amplify the Playoff debate.

NOTE: This will be updated throughout the weekend as games go final. Here is how we project the rankings will look on Sunday in the final rankings of the season, along with bowl projections. Teams in bold play this weekend.

Here’s what we think the CFP will be come Sunday:

In this situation, we think Oklahoma will beat Texas and jump current No. 4 Georgia. The Bulldogs could battle and keep it close against Alabama in the SEC Championship Game, but we think the CFP selection committee will reward a one-loss conference champion in Oklahoma.

It might take Texas beating Oklahoma again for the Buckeyes to move into the top four.

As most attention is focused on Alabama-Georgia, Oklahoma-Texas and Ohio State-Northwestern for CFP purposes, there’s another game that seems more ripe for an upset.

Undefeated UCF, ranked No. 8, will have to beat Memphis with star quarterback McKenzie Milton out after a devastating leg injury sustained in the 38-10 win against South Florida.

If Memphis beats the Knights for the American Athletic Conference Championship, that opens the door for the Boise State-Fresno State winner in the Mountain West Conference title game to take the New Year’s Six spot.

Right now, we think UCF will do just enough to pull out the emotional win.