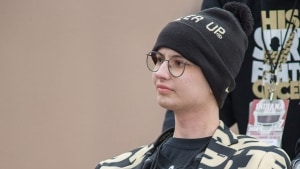 It’s with the deepest sorrow that we have to say goodbye to @theTylerTrent. We have all become #TylerStrong. To his family, words can’t express how sorry we are that he has passed. His life May have been short, but his legacy with be forever. pic.twitter.com/rONp00YoeK

Trent became synonymous with Heisman finalists Kyler Murray, Tua Tagovailoa and Dwayne Haskins as the most recognizable names in college football as college football fans across the country let Trent know how many people he was inspiring.

Trent was diagnosed with cancer for the first time as a 15-year-old in 2014. The cancer left after months of chemotherapy, but it returned just as he was getting ready to begin his freshman year at Purdue in 2017.

This past fall, the rare bone cancer, osteosarcoma, spread to his spine and debilitated Trent, forcing him to withdraw from Purdue. Quickly, however, he became the soul of the Purdue football team and an instant sensation when the Boilermakers beat Ohio State on Oct. 20 in West Lafayette, Indiana, with Trent in attendance.

Trent was a writer for the Purdue student newspaper, the Purdue Exponent, as well as a guest columnist for the Indianapolis Star. He was a captain for Purdue during its rivalry win against Indiana and won an award from the Governor.

Some notable figures around college football took to Twitter to express their condolences to the Trent family and inspirational messages they took from Trent. There’s also a cancer fund in Trent’s name that you can donate to here.

Thank you for inspiring all of us, Tyler. We’ll never forget you. #TylerStrong pic.twitter.com/TgypXJjRco

The excerpt below is from his column in the Star on Dec. 5. No question this young man lived a full life.

“Though I am in hospice care and have to wake up every morning knowing that the day might be my last, I still have a choice to make: to make that day the best it can be. To make the most of whomever comes to visit, texts, tweets or calls me.

“Yet, isn’t that a choice we all have every day? After all, nobody knows the amount of days we have left. Some could say we are all in hospice to a certain degree.

“So why don’t we act like it? Where is your gratitude? With Christmas coming up, what are you thankful for? I had to write my will recently, and I’m just thankful I can give my family Christmas presents, maybe even for one last time. Let’s not forget that my doctors gave me three months to live almost two-and-a-half months ago. So why can’t we live grateful lives? Why can’t we make every day count like it’s the last?

To me, that’s what gratitude in hospice means.”

RIP @theTylerTrent. Your fight, determination and inspiration to so many will not be forgotten.

Your impact will continue for many years. #TylerStrong

I promised Tyler Trent we’d save him a chair on our set. We’ll honor that promise at the close of the show tonight.

The warm emotions of calling a Rose Bowl… and then to hear news of Tyler Trent’s passing. Thank you, Tyler and the Trent family for giving millions the gift of your bravery and relentless spirit. I will never forget you or that magical night in West Lafayette. Be at peace.

So much love! Bless his family. https://t.co/9CaDC5EHtO

On behalf of @IndianaFootball, our thoughts and prayers are with Tyler Trent’s family. Tyler showed all of us the true essence of courage and fight. #LEO pic.twitter.com/nJkqrJ2XOp