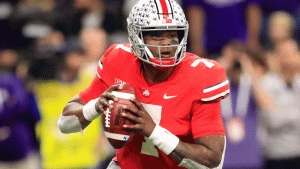 There are five games on Tuesday, Jan. 1, 2019, including the Fiesta Bowl, Rose Bowl and Sugar Bowl as part of the New Year’s Six games. The LSU-UCF Fiesta Bowl is at 1 p.m. Action starts with the Outback Bowl at 12 p.m.

Keys to the game

Can Iowa force Mississippi State to throw the ball to win? Mississippi State QB Nick Fitzgerald has more than 1,000 rushing yards this season, but he completed only 52.6 percent of his passes for 1,615 yards. When Iowa is on offense, the Hawkeyes must protect QB Nate Stanley from a disruptive pass rush.

Mississippi State: We can go with Fitzgerald, but the Bulldogs’ biggest difference makers live on the defensive line. Jeffrey Simmons is one of those stars, making 14.5 tackles for loss as Mississippi State allowed only 104.2 rush yards per game.

Iowa: Another year, another season of Iowa relying on the tight ends in the passing game. This year, T.J. Hockenson won the John Mackey Award as the country’s top tight end. He has 46 catches for 717 yards.

RELATED: The record of every conference in bowl games this season

They’re back! UCF is playing in a New Year’s Six Game again — and gets another SEC foe. The Knights will be excited to play, though they will be without star QB McKenzie Milton. Darriel Mack Jr. struggled against South Florida before torching Memphis for 348 passing yards, 59 rush yards and six total touchdowns. But can he perform well consistently?

“In games like this, I think it comes down to your ability to handle adversity.” -Heup

Hear from both coaches before we battle LSU in the 2019 @Fiesta_Bowl 👇 pic.twitter.com/HlkDVY5cYG
— UCF Football (@UCF_Football) December 31, 2018

UCF: As mentioned above, it’s probably up to Mack to be consistent in the passing game. He was 19-for-27 against Memphis in the AAC title game…but was 5-for-14 against South Florida when he unexpectedly had to come in when Milton got hurt.

LSU: Just like UCF, LSU will need its quarterback to to find targets at a strong enough rate to allow the running game to find space. Joe Burrow is completing only 57.4 percent of his passes this season, but he was much improved in the final three games of the regular season.

Kentucky last played on New Year’s Day twenty years ago, when the Wildcats lost to Penn State. Now, the two programs are matched up again. Both teams rely on a strong running game, so whichever offense can find more balance will be in much better shape. If both teams struggle on the ground, Penn State would have the edge at quarterback in Trace McSorley.

Penn State: When healthy, McSorley is one of the nation’s top players in his position. So any assistance Miles Sanders can give McSorley would be a big boost. Sanders has rushed for 1,200 yards, so if he can get rolling, that would take pressure off McSorley, who’s also a factor in the running game.

Kentucky: Josh Allen is one of the best players in the country, so he’ll be asked to do a lot to slow down McSorley. Allen has 84 total tackles, 18.5 tackles for loss and 14 sacks going into the Citrus Bowl.

MORE: How Alabama and Clemson match up statistically

Both teams come to Pasadena after overcoming deficiencies. Ohio State struggled defensively for much of the season, only for QB Dwayne Haskins to deliver en route to becoming a Heisman finalist. It was the opposite for Washington, which often struggled to be strong on offense week in and week out.

Washington: RB Myles Gaskin is one of the best in the Pac-12 and the country, so QB Jake Browning will need to find his receivers and take attention away from the running back.

How motivated is Georgia? On paper, the Bulldogs are the much stronger team here. Since losing to LSU, Georgia has looked like a title contender. Only a close loss to Alabama kept UGA from the College Football Playoff. Texas will be motivated. The Longhorns would love to use a win here as a launching pad for an even bigger 2019 season.

Tomorrow. All eyes will be upon us. Texas vs. Georgia in the Allstate Sugar Bowl.#ThisIsTexas #HookEm @SugarBowlNola pic.twitter.com/HFtR9w30l4

Georgia: As good as Jake Fromm has been again this season, the sophomore seemingly is missing out on the same attention as some of his other star peers at his position. Getting a primetime game against Texas is a perfect showcase.

Texas: QB Sam Ehlinger is asked to do a lot for the Longhorns. He has 3,123 passing yards and 25 touchdowns and also leads the team with 13 rushing scores.