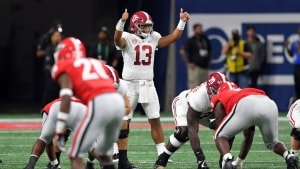 Here’s everything you need to know about it:

Alabama leads the way with six finalists for awards, including Tua Tagovailoa and Quinnen Williams, who are both up for two awards.

The two awards Tagovailoa is up for hold extra significance due to another award being presented this Saturday — the Heisman.

Tagovailoa and Oklahoma’s Kyler Murray are both in the running for the Maxwell Award for the college player of the year, and the Davey O’Brien award for the nation’s best quarterback, and are also two of the three finalists for the Heisman.

RELATED: Comparing the 2018 Heisman finalists: How do Tua Tagovailoa, Kyler Murray, and Dwayne Haskins stack up?

Here is a list of all awards and the finalists for each:

The Home Depot Coach of the Year