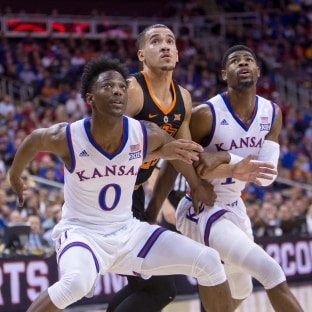 College basketball: Will the Big 12 be the most competitive conference this season? Here's 10 storylines to consider


The Big 12 is the most competitive conference from top to bottom in the country every season.

I don’t see it changing one bit.

At one point in February last season, every Big 12 school except Iowa State was in the mix for an NCAA tournament berth. Every school but one.

This season, I expect that number to be 10. Yes, all 10 will be in consideration in February for a bid. Now, expecting all 10 to be in the field is likely implausible since someone has to lose. So don’t get bogged down on the rankings and who is at the bottom. I’m as optimistic on Oklahoma State at No. 10 as Baylor a few spots higher.

This will be a wild Big 12 season and one that will be as interesting to track as well.

1. What are the chances Dedric Lawson does become the Big 12 player of the year and a national player of the year candidate? Kansas coach Bill Self said as much during an interview on March Madness 365 in the spring. He fully expects the 6-9 Memphis transfer to be the next Kansas player to be a player of the year candidate after Frank Mason and Devonte’ Grahamwere each of the past two seasons. Lawson averaged 19 and nine for Memphis two seasons ago, and his brother K.J., also a Kansas transfer, chipped in a dozen a game for the Tigers. Self has rarely been wrong about hyping a player. And if he says Dedric is going to be the next big thing in Lawrence, then he deserves the benefit of the doubt. And if Kansas is going to win the Big 12 and reach another Final Four, then the Lawsons will have to deliver. They did have a season of learning the KU system, so they should come in ready to burst onto the Big 12 scene.

2. How will Kansas State handle expectations? The Wildcats return essentially the core of their team that made a surprise run to the Elite Eight. And keep in mind the Wildcats won three of the four games in the NCAA tournament with their top scorer Dean Wade playing a total of eight minutes (in the win over Kentucky in the Sweet 16). The Wildcats legitimately should be in consideration for the Big 12 title. Self said as much in the spring. Kansas State will experience being the hunted for the first time with this group. But they have the experience to be able to handle such a tag. And Bruce Weber has been in this position in years past. Beating Kansas, at least once, will do wonders for this team’s self confidence – if it can get it done. But the rivalry games between the two schools in the Sunflower State should be at an all-time high.

3. How close is West Virginia to having the best front court in the country? Not too far. The Mountaineers are in the conversation for this with Sagaba Konate, Lamont West, Esa Ahmad, Wesley Harris and Teddy Allen anchoring this unit. The Mountaineers lost Jevon Carter and Daxter Miles Jr., the top perimeter players. That’s a lot to replace since they were on the ball so much. But if the backcourt — which will be by committee — can be more than serviceable and be the first line of defense, or at least get the offense going, then the Mountaineers will be in the mix for the Big 12 title. Bob Huggins has a ferocious frontline that will seem impenetrable at times.

4. How will Dylan Osetkowski handle not having Mo Bamba around at Texas? This is one of the more intriguing situations in the league. Bamba was such a space eater and a presence that other players fed off him inside and on the perimeter. Osetkowski was a beneficiary on numerous occasions. What made him so effective was his ability to knock down the open shot when the ball was swung and also be another force on the backboard. The Longhorns still have size inside, but the onus will be on Osetkowski to be much more featured. I’m sure he can handle the new role, but nonetheless it will be intriguing to watch how he handles his moment to shine.

5. How soon before the rest of the country picks up on Lindell Wigginton? Well, it should happen over Thanksgiving. Wigginton and the Cyclones get Arizona in the first round of the Maui Invitational. Gonzaga or Illinois is up next in the second game. Wigginton was known in the Big 12 last year, but he was overshadowed by a slew of high-quality guards like Devonte’ Graham of Kansas and Trae Young of Oklahoma. Iowa State was the one team that fell off and didn’t make an NCAA tournament run. That won’t be an issue this season. Wigginton should shine early and often. The Cyclones went through a natural transition season after Steve Prohm took over the program. Expect them to be in the mix for a top-four finish and Wigginton for all-league honors.

6. What are the chances TCU could have one of the best backcourts in the Big 12? The Horned Frogs will certainly be in the discussion. Jamie Dixon has a versatile threesome who will log a lot of minutes and can be highly productive. Alex Robinson averaged 6.1 assists a game, and Jaylen Fisher, pre injury, averaged 5.4. Add in newcomer Kendric Davis and the Horned Frogs have three guards who could all play together and cause havoc. Dixon is fairly confident this could be his best team in his brief tenure in Fort Worth. TCU made the NCAA tournament last season but this is the type of team that could have a decent chance to advance, not just get a bid and bow out.

7. How much will Jarrett Culver be featured at Texas Tech? Quite a bit. He is a rising star in the Big 12 and should be a national name rather quickly. Culver averaged 11.2 points a game but took just an average of eight shots a game. Those numbers will take a big uptick. Culver is the top returning scorer after Keenan Evans and Zhaire Smith left (Evans was a senior, Smith an early entrant). Tech coach Chris Beard has done a sensational job of featuring players in his short tenure in Lubbock, and the Red Raiders’ chances of making it back to the NCAA tournament will rest largely on how soon Culver becomes a dominant player.

8. What’s at stake at Baylor? This could be Scott Drew’s most challenging rebuild since he put the program into the regular conversation of being an NCAA tournament team. The Bears lost a lot of talent from last season’s roster with the departures of Manu Lecomte, Jo Lual-Acuil Jr., Terry Maston and. But Drew and his crew have never disappointed in the area of providing the league with a tough zone to penetrate, length and athleticism. Expect the Bears to be a pest amid the Big 12. But figuring out what they’ve got will be a work in progress. I struggled on where to put them in the standings, and placing them in the bottom third was only for ranking purposes. The difference among the bottom four in the Big 12 could just be one game in the loss column.

9. Who will be the breakout star at Oklahoma? I’m putting it on Brady Manek. The sophomore forward had his moments last season, but all the attention was on Trae Young. He averaged 10 and five last season and those numbers should climb with the ball moving more without Young. Lon Kruger will need him to be even more assertive this season. His ability to knock down 3s is also a huge need for the Sooners. Once again, where to pick Oklahoma was a tough call. It’s hard to see them out of the mix since there is enough talent to warrant a possible postseason berth. But there are just too many good teams in this league.

10. How soon before Oklahoma State makes a mockery of its power ranking position? Probably by December. Once again, I struggled where to put the Cowboys, and if I had to do it again I might push them up to at least eighth, if not seventh. The return of Cameron McGriff and the eventual eligibility of Indiana transfer Curtis Jones should catapult the Cowboys higher. Mike Boynton told NCAA.com that Michael Weathers, a transfer from Miami of Ohio, and freshman Isaac Likekele will have breakout seasons. Boynton had the Cowboys a game or two away from a bid last season. I don’t see why he couldn’t pull that off again and put the Cowboys in position for a bid in March.

On the bubble: Texas Tech, Baylor, Oklahoma and Oklahoma State.

Our picks for the All-Big 12 first team: