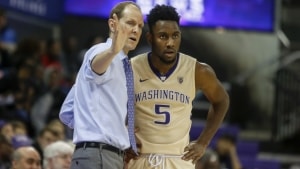 
SEATTLE — This time a year ago, Mike Hopkins was trying to get his inherited team to learn the system he wanted to install in his first season at Washington.

The lessons 12 months later are less about how the Huskies are going to play and more about managing expectations and building on success.

“In any team, you challenge human nature. You mention expectations, how do you manage that? That’s a whole new journey. You got them to believe, you got them to believe in each other, how do you strengthen that?” Hopkins said Thursday. “That’s the unknown. … One of the reasons I felt we had success was not just the belief but we had a chip on our shoulder. You can never lose that.”

Hopkins and his team enter his second year in charge at Washington facing raised expectations. The Huskies return five starters — and 90 percent of the scoring — from a team that was in the conversation for the NCAA tournament late into last season.

It’s the reason Washington was picked to finish third in the Pac-12 Conference preseason poll and it might also be the reason the Huskies finally end an NCAA Tournament drought that’s now reached seven seasons.

The Huskies finished last year 21-13 and made the second round of the NIT before losing to Saint Mary’s. It was a remarkable turnaround from a year before when the Huskies went 9-22.

“Still a lot of growth trying to raise the standard and trying to build upon what we built last year,” Hopkins said. “Our standard until we win (a national title) I’ll never be happy. You’re constantly striving to raise the bar and get better and that’s what we’ve been focused on.”

The Huskies won’t take the floor for a game that counts until their Nov. 6 season-opener against Western Kentucky. But the Huskies will get a significant test Sunday when they play at highly regarded Nevada in an exhibition game.

Last year, Washington lost to Boise State in an exhibition game in October and it was an eye-opening experience for players and coaches alike, leading to changes that ultimately benefited the Huskies.

“That really woke guys up,” Washington guard David Crisp said. “Guys were like, ‘So that is why coach is on me. This is why we have to work hard.'”

No wakeup call should be necessary this time, especially facing a Nevada team coming off an NCAA tournament run that ended with a loss to Loyola-Chicago in the regional semifinals. It’s only a precursor to what Washington faces in its nonconference schedule with games against Auburn, Texas A&M, Minnesota and Gonzaga in the first four weeks.

“It gets back to what you were talking about, expectations. Let’s go play one of the best. Let’s go see it,” Hopkins said. “You’re playing in a tough environment in front of 11,000 fans against a … great coach, great program, and let’s see where we stand.”

This article was written by Tim Booth from The Associated Press and was legally licensed through the NewsCred publisher network. Please direct all licensing questions to legal@newscred.com.