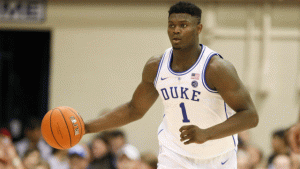 One of the most important games of any non-conference schedule is the first game of a multi-team tournament. Kevin Pauga, a Michigan State assistant athletic director, has been preaching this for years.

He’s right. Losing the first game and ending up in the losers’ bracket could mean missing out on critical games.

Here are all the must-watch Thanksgiving games this weekend, Wednesday through Saturday, and what’s at stake. Stay tuned for the best games to watch on Sunday, as some holiday  tournament finals will be in action.

*All times listed in ET

This is the matchup everyone wanted. It’s too bad the Zags aren’t at full strength with Killian Tillie out for the foreseeable future with an injured ankle. Still, the Zags showed in the second half Tuesday night against Arizona that they’ve got the pieces to still compete for a title. The second-half shot making by Zach Norvell was a difference maker for the Zags. Rui Hachimura is a tough matchup and continues to play at such an even pace. Of course, his most challenging assignment will come against Duke’s Zion Williamson. He seems unstoppable. The most important thing for the Blue Devils is the continued impact of Marques Bolden. If he plays as large as he did Tuesday night against Auburn (altering and shot blocking) then Duke can be even more intimidating. Gonzaga doesn’t have to win this game to convince anyone that the Zags are a title contender. They will be.

The Vols haven’t been tested yet. They will in this event. They are playing like a machine and should come out of this tournament at least 1-1.

The Huskies, who got drilled at Auburn, need to reassert themselves as the team to beat in the Pac-12. This could do wonders for their national profile. The Huskies, who played Texas A&M late Tuesday, need to show well. So, too, do the Gophers, who played Santa Clara Tuesday. Minnesota isn’t healthy yet, but have one of the best double-double players in Jordan Murphy and a rising star in freshman Daniel Oturu. That’s quite a tandem inside, something the Huskies will have a hard time dealing with in Vancouver.

Butler could end up being the best team in the Big East but this will be a barometer to let us know exactly where the Bulldogs stand.

Marquette needs a strong showing after getting blistered at Indiana last week. Kansas has the look of a title team and suddenly has found offense from Lagerald Vick. A Kansas-Tennessee matchup Friday would be a possible Final Four/Elite Eight-level game. If Marquette can spoil it, the Golden Eagles will be taken much more seriously as a deep NCAA team.

Virginia comes to the Bahamas as the favorite here and one of the top teams to win the title. The Cavaliers are getting the play out of De’Andre Hunter (who was hurt for the UMBC game) and Alabama transfer Braxton Key that makes the Cavs even tougher to take out.

Arizona is the surprise team out of Maui. Sean Miller has this team playing defense to his liking and the squad has shown tremendous grit. How can you not love Justin Coleman’s moxie on the floor. Auburn is still figuring itself out after adding suspended players from a year ago. A 2-1 Maui record would be tremendous for the Wildcats. A 1-2 record for Auburn would definitely be seen as a disappointment. But this Auburn team will still contend for the top spot in the SEC.

This may end up being the most intriguing tournament over the weekend. Nova was an early favorite but has lost two home games to Michigan and Furman. The Wildcats desperately need to play well, not just win this event.

The sleeper here is Memphis. The Tigers lost at LSU and I’m sure would love a second shot at them on day three. That could very well occur if Nova can’t get its act together and defend.

The Wolf Pack are top 10, but haven’t played an elite schedule — yet. This is a critical game for the Wolf Pack. Tulsa, a sleeper pick in the AAC, has guards who could cause problems. Senior DaQuan Jeffries won’t show any fear going against Jordan Caroline and the Martin brothers. This is Tulsa’s toughest game to date. Tulsa still plays Kansas State and getting a split would help its profile come March. Nevada, which beat BYU in the opener, still has games to come at Loyola-Chicago, at USC and against Arizona State and Utah.

I’m most curious to see how Northwestern comes out of this field. Win three games and the Wildcats will continue a trend that has seen the Big Ten soar so far this month.

North Carolina has already won two true road games, but the level of talent on the opposite end of the court increases this week in Las Vegas. The Tar Heels are the one team here that could win the title with Michigan State second on that list. Let’s see if the Tar Heels can get some momentum out of this tournament before going to play the hottest team in the country not named Duke — Michigan, next week in the ACC-Big Ten Challenge.

The Wooden Legacy may not have an NCAA tournament team in the field. The Pirates visit Nebraska and go to Saint Louis, two likely NCAA tourney teams. Grand Canyon will tussle with New Mexico State for the WAC title.

Florida State has looked like an ACC title contender so far, but will have an NCAA tournament-like game against LSU if they meet in the semifinals. The LSU-Florida State game would match the two best teams — right now — in this field but in a semifinal.

The most intriguing team here is UCLA. Moses Brown has been sensational so far this season, grabbing every rebound in sight. UCLA needs to get out of here 1-1 since the Pac-12 won’t offer up as many quality wins as Texas can get in the Big 12. The Spartans are clicking now — against lesser competition — like they were projected. We should all judge Michigan State from the second half of the Kansas game on.

Utah could emerge as an NCAA tournament hopeful after giving Minnesota a run for a bit. Hawaii is in transition, but has a chance to compete near the top of the Big West.

The Herd have the majority of its team back from last year’s squad which knocked off Wichita State in the first round of the NCAA tournament. Maryland has great length, athleticism and an inside tandem of Bruno Fernando and Jalen Smith that will be tough to defend. Yet, neither Marshall and Maryland have faced the level of talent they will see against each other Friday night. This is a great test for both teams.

If DePaul wins this game then it’s time to take the Blue Demons seriously as a possible postseason team. DePaul’s overtime win against Penn State last week put them in position to make these games matter. Notre Dame lost at home to Radford. The Irish are beatable. DePaul still has games at Northwestern and against Boston College before the Big East. This is the road game the Blue Demons could get. But the Irish are hardly slouches. This should be a late-possession game with the winner able to create some serious momentum heading into December. Notre Dame’s schedule gets brutal after this game playing Illinois, Oklahoma, UCLA and Purdue in the ensuing four games.

BYU has a star and stat stuffer in Yoeli Childs. But BYU needs, desperately has to have a quality non-conference win before it gets to the WCC. This is BYU’s best shot after losing at Nevada. Utah, Utah State and at Illinois State probably won’t do it for BYU. Houston will start to see its schedule get tougher with games upcoming against Oregon, at Oklahoma State, Saint Louis, LSU and at Utah State. Getting at least one road win with this slate is imperative before Houston gets into the AAC.

Share. Twitter Facebook Google+ Pinterest LinkedIn Tumblr Email
Previous ArticleJoey Logano talks about the meaning of the championship trophy, and why he put his baby inside of it
Next Article How Gonzaga beat No. 1 Duke to win the 2018 Maui Invitational