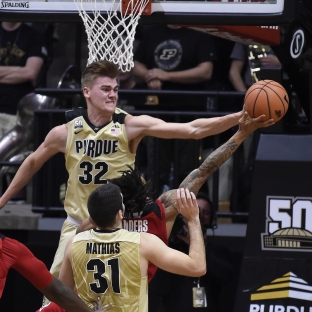 
Here’s what you need to know for Tuesday, Jan. 9:

Game of the night

The Boilermakers are 4-0 in the Big Ten, tied with Ohio State, and they’re a game ahead of Michigan State and Michigan. This is the first of two straight road games for Purdue, with the second game at Minnesota Saturday. Purdue has the most experience in the league. This is a team that has handled adversity in Taiwan and the Bahamas. And they’ve come out stronger each time.

Michigan is playing its best basketball of the season. And the Wolverines are looking for their eighth straight win. This is easily the hardest week of the season for Michigan. The Wolverines are at Michigan State on Saturday. Their contender or pretender status should be known by the end of the weekend.

A month ago this game looked like it would be for first place in the SEC. Now, Kentucky is the team that still has the look of being a regular-season champ. Suspensions have crippled the Aggies’ chances. Texas A&M sits in last place in the SEC at 0-3. The next game after Kentucky is at Tennessee. This is the week where the Aggies find out what they’ve got left. The possibility of being 0-5 to start the SEC is real. How Texas A&M responds in a hostile environment in a must-win game will be the most pressing question of the night.

Just when you think we’ve seen and done it all, we checked in at No. 21 in this week’s @AP_Top25. The significance? In all of our storied history, we have never been ranked No. 21 in the AP Top 25. Well, until now. pic.twitter.com/BdSV7v384N

Kentucky did lose at Tennessee, but the Wildcats rarely lose two in a row, let alone one at home after a road loss. This is a gut check for Kentucky too, knowing the Aggies are in desperation mode.

The Red Raiders and the Sooners are the two likely challengers to West Virginia and Kansas to win the Big 12. TCU can’t be dismissed just yet, but the Horned Frogs have already lost twice at home, albeit to KU and OU. Trae Young is going to score. How much he’s able to avoid turnovers and dish the ball could be a different kind of challenge against the Red Raiders. He won’t face a smothering defense like Press Virginia, but the Red Raiders have been stifling in the halfcourt at times this season.

“There’s gonna be dog fights, there’s gonna be battles…Proud of where we’re going – we have to learn from this one because the next one will be just as hard.” pic.twitter.com/JmrsEkR276

If Texas Tech is able to pull off a road sweep of Kansas and Oklahoma, then the Red Raiders will be a real threat to win the league.

The Pirates continue a road trip where they won at Butler behind the performance of NCAA.com Player of the Week Angel Delgado. The Pirates have shown tremendous grit this season. No challenge is too tall. The Golden Eagles have one of the best scorers in the country in Markus Howard. He’s putting up huge numbers lately, notably 52 points in a win at Providence last week.

The Pirates will likely be physical on Howard, but containing him won’t be easy. Marquette will have to defend all five positions well to beat the Pirates. The reception at home, though, should be loud and proud for Howard after his stellar week on the road.

Rising in the Big East

The Bluejays knocked down 16 3s in a road win at Georgetown. Butler owns a win over No. 1 Villanova. These two teams should be NCAA tournament worthy and along with Seton Hall, show the overall depth of the Big East behind frontrunners Villanova and Xavier. Butler was up 11 points before losing to Seton Hall. That puts even more pressure on the Bulldogs in this one to avoid a three-game losing streak.

The Big East is so good that a team can survive that kind of skid and still be good to go for a tournament bid if it can take care of the games it should win the rest of the way.