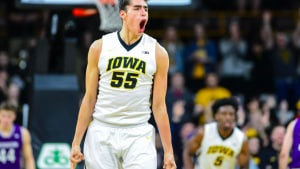 
IOWA CITY, Iowa — Iowa center Luka Garza came back to Iowa City this summer determined to move closer toward his goal of becoming one of the nation’s top big men.

But as the workouts piled up, Garza noticed that he would be in an unusual amount of pain afterward — pain that worsened as the days wore on.

Soon, even standing became a chore.

It took a few ultrasounds and a CAT scan, but doctors eventually discovered a 9-pound benign cyst attached to Garza’s spleen. Garza had surgery to remove it in early September, and he might even be back when the Hawkeyes open their season on Nov. 8 against UMKC.

Iowa is one of four schools nationally to have all five starters return with all five being its top five scorers in 2017-18 (Syracuse, Brown, Harvard). #Hawkeyes pic.twitter.com/oKB9GiUBbG

Whenever Garza returns, the 6-foot-11 sophomore will do so with a new perspective on both life and basketball.

“It’s just a hard situation. It’s a little adversity, but I’ve always been a person that works through adversity,” Garza said before acknowledging that “it might be a little bit more than a little” adversity.

Though the 19-year-old Garza has yet to return fully to practice, he and the Hawkeyes are hopeful that his potentially life-threatening medical situation will soon be behind him.

When it is, Iowa will be getting back one of the more intriguing young players in the Big Ten.

Garza, who grew up in Washington, seemed like he might have been a bit of a steal by the Hawkeyes after he won player-of-the-year honors for the District of Columbia, averaging 24.6 points and 11.7 rebounds a game as a senior at the private Maret School.

Garza immediately broke through a crowded frontcourt to make 26 starts. He averaged 12.1 points a game and 6.4 rebounds and led the Hawkeyes with 32 blocked shots.

MORE: 7 college basketball records that (we think) will never be broken

Garza was twice named the Big Ten’s freshman of the week, and his 16 rebounds against Wisconsin were the most by an Iowa player in two years.

“Luka is huge — both literally and figuratively,” junior forward Tyler Cook said. “His skill set, how hard he plays, the things that he can do on the court, his impact on his teammates is something that can’t be replaced. It’s something that makes him special as a person and as a player. I’m just thankful that he’s getting healthy.”

That wasn’t always a guarantee.

Garza said his doctors don’t really know when or why his cyst developed, though he said he played last season without any pain in that area.

But Garza said that, had the cyst not been removed, he would have run the risk of it having it ruptured in practice or during a game by an errant elbow or an awkward fall. That may have caused the spleen to rupture as well, a scenario that would’ve put Garza’s life in danger.

“I never thought something like that could be going on,” Garza said. “It was definitely a little scary, because there was a big risk to the surgery. But the surgery went really well. Everything went as well as possible.”

The Hawkeyes are likely to err on the side of caution with Garza, who only began shooting last week and running on Friday. The focus will be on getting Garza’s conditioning in order until he’s cleared for contact.

The key now, according to coach Fran McCaffery, is patience.