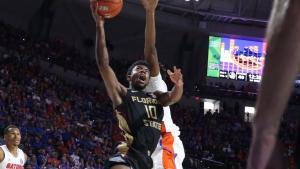 
Annually, the Florida State Seminoles and the Florida Gators clash in the Sunshine Showdown. For five straight years, the Seminoles had dominated the series, and that tradition continued for a sixth consecutive year with a 63-51 victory over sixth-ranked Gators at the Stephen C. O’Connell Center Sunday in Gainesville.

Devin Vassell scored 13 points and Trent Forrest added eight rounds and seven assists for the Seminoles, who head toward Friday’s home opener with a 1-1 record.

During the first half, both teams struggled offensively, which kept the score tight for the full 20 minutes of play. With Florida State shooting 26 percent from the field and the Gators (1-1) at 22 percent, neither team was willing to let the other get too far ahead, having an answer for each point scored.

In a constant back-and-forth battle of layups, turnovers and blocks, the Seminoles managed to lead 25-21 at the half.

Late free-throws by both Forrest and redshirt sophomore RaiQuan Gray helped the Seminoles to an advantage at the break.

Then, at the start of the second half, the Seminoles fired back up.

Within the first few minutes, an explosive dunk by Vassell, assisted by Forrest, set up the team’s momentum, and, a few moments later, FSU had stretched its lead to double-digits at the 17:05 mark.

The Gators briefly got to within six, but a 3-point answer from Gray put them back at arm’s length. And the Seminoles were in control the rest of the way.

3-POINT EVOLUTION: The history of the 3-point line

Vassell followed up a promising opener at Pitt with 13 points, six rebounds, two steals and a block in 34 minutes, while junior M.J. Walker (12 points) and redshirt sophomore Malik Osborne (10 points) joined him in double figures.

With their challenging road swing behind them, the Seminoles will host Western Carolina next on Friday at 7 p.m. ET, in the first of four consecutive home games.