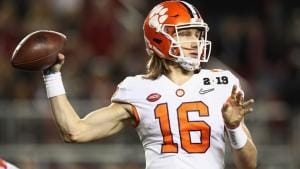 
Clemson hasn’t lost a football game since falling to Alabama in the national championship on January 1, 2017. They avenged that loss with a perfect season and title of their own in 2018.

Here’s what Clemson fans have to look forward to in 2019.

Here is the full, detailed schedule for Clemson’s 2019 football season, with past games and results first, then the TV schedule for future games below.

You can find tickets to each of Clemson’s home games here.

Here’s what happened in every game of Clemson’s 2018 schedule:

One of Clemson’s biggest strengths last season was its monstrous defensive line. But Clelin Ferrell, Christian Wilkins, and Dexter Lawrence are all gone thanks to the first round of the 2019 NFL Draft.

So which returning players will be leading the charge for the Tigers?

The first choice is obvious: Quarterback Trevor Lawrence. In 2018, the true freshman threw for 3,280 yards, 30 touchdowns, and 4 interceptions. On the biggest stage in the sport — the national championship — he was 20-for-32 for 347 yards, 3 touchdowns, and zero picks. Hard to get much better than that, but don’t be surprised if he puts up bigger numbers against a slightly easier regular season in 2019.

Lawrence’s partner in the backfield, Travis Etienne, is also poised for another monster year. Etienne improved drastically between his freshman and sophomore years, rushing for 1,658 yards and 24 touchdowns last season. Sustaining that level of production would be a tall task, but you can guarantee that Etienne will be one of the Tigers’ most lethal weapons this year.

Lawrence wouldn’t have had the coming out party that he did were it not for the talented duo of Justyn Ross and Tee Higgins. Ross racked up 1,000 yards and 9 touchdowns, while Higgins had 936 yards and 12 touchdowns. With Hunter Renfrow gone, those numbers might even go up this season.

We have Clemson sitting at No. 1 in our preseason Top 25. Here’s that breakdown:

The Tigers will go into the season as the huge ACC favorites, national title favorites with Alabama and possibly the Heisman frontrunner in QB Trevor Lawrence. The schedule is also far from daunting, so it would be a slight surprise if the Tigers don’t go 12-0 (or 13-0 with an ACC crown). Can any ACC team even stay within two touchdowns?