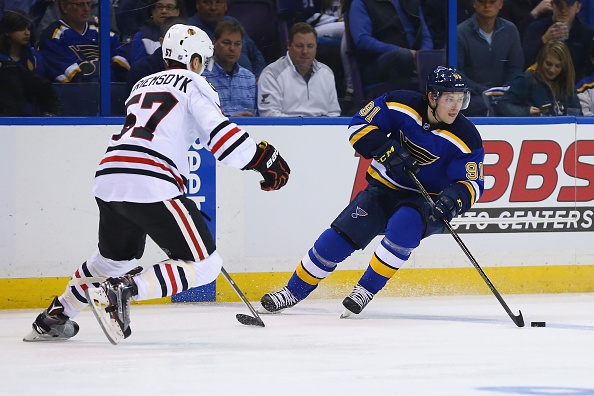 The Blues look to eliminate the Blackhawks in Game 5. (Photo : Getty Images)

The Blues will take the ice in St. Louis on Thursday looking to advance to the second round, while the Blackhawks attempt to send the series back to Chicago when the lights come up on Game 5.

These clubs split Games 1 and 2 in St. Louis, with the Blues picking up a 1-0 overtime victory and the Blackhawks battling back to take Game 2, 3-2. St. Louis then toppled Chicago, 3-2, in Game 3 and 4-3 in Game 4 to put the defending Stanley Cup champions on the brink.

St. Louis hasn’t advanced to the second round since the 2011-12 season, which was the last time Chicago exited in the first round. The Blackhawks have won three Stanley Cups in the last six seasons.

Vladimir Tarasenko led the charge for the Blues in Game 4, scoring two goals to give him three for the series. Jaden Schwartz (2) and Alexander Steen (1) also lit the lamp for St. Louis.

Andrew Shaw (2-2-4) scored his second goal of the series for the Blackhawks in Game 4, but will serve a one-game suspension for using a homophobic slur toward an official. Duncan Keith had Chicago’s two other goals.

Though they have a commanding lead, this is a Blues team that has coughed up 2-0 series leads to lose in six games in the first round over the last two postseasons. That’s why St. Louis isn’t so quick to look ahead.

“I think we’ve smartened up to falling into those traps in previous years of thinking we’ve accomplished something before we’ve accomplished anything,” Blues captain David Backes said per NHL.com. “In order to win a series, you’ve got to win four games, and we’ve only won three, so we’ve got a tall task still ahead of us. We’re focused.”

As for the Blackhawks, they have no shortage of confidence and history is on their side. Chicago is known as a resilient group and is 43-15 in Games 4-7 under coach Joel Quenneville since 2009, according NHL.com.

“I don’t know if there’s extra pressure,” Quenneville told the site. “I think when you’re down 3-1, I think it shifts and everybody wants to win in the worst way. That’s why we’ve got to come with that attitude and appetite [Thursday]. But I don’t think it’s any different than it’s been in other years.”

Brian Elliot mans the blue paint for St. Louis after stopping 39 of 42 shots he faced in Game 4. The Blackhawks will counter with Corey Crawford between the pipes after he yielded four goals and made 16 saves last time out.

How will this series play out?