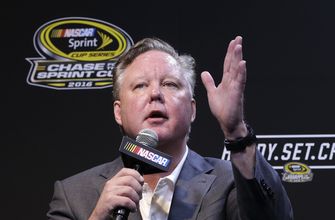 CHARLOTTE, N.C. (AP) The president of NASCAR told employees Tuesday the France family that owns a majority stake in the nation’s top auto racing series ”remains dedicated to the long term growth of our sport” following a report of a possible sale.

President Brent Dewar sent a memo to staff one day after a media report said the France family was exploring a potential sale of its NASCAR holdings. The Associated Press received a copy of the memo from a person who shared it on condition of anonymity due to the sensitive nature of the topic.

Dewar wrote in the memo that NASCAR does not comment on ”industry rumors” but did not specifically address a possible deal by the France family.

”For over 70 years, the France family has worked hard to invest in the sport of NASCAR, including our recent acquisitions of ARCA,” Dewar wrote, referring to the recent purchase of the Automobile Racing Series of America, a lower-tier stock car series that sometimes races in conjunction with NASCAR events.

NASCAR has struggled with recent ratings and attendance declines and several big-name sponsors have scaled back or pulled out. Lowe’s, the only sponsor seven-time champion Jimmie Johnson has had in his 18-year career, is leaving at the end of the season. Home Depot, Target, Subway, Dollar General and scores of other sponsors have already exited racing.

Additionally, title sponsor Monster Energy signed just a one-year extension through 2019 and NASCAR admitted it is re-evaluating its sponsorship structure.

There have been rumors dating to last season that NASCAR Chairman Brian France wanted out, but many team owners seemed surprised by Monday’s report from Reuters citing unidentified sources that the family has engaged investment bank Goldman Sachs to explore a sale. One team owner, who spoke to AP only on condition of anonymity, said France firmly told owners in recent months the series was not for sale.

Television ratings have continued to decline over the past decade and the retirements of Jeff Gordon, Dale Earnhardt Jr., Tony Stewart, Danica Patrick and Carl Edwards may have contributed to fans tuning out. But at-track attendance has also suffered and the three public companies that own tracks where NASCAR races are held have all reported attendance revenue declines.

NASCAR was founded by Bill France Sr., and handed down to his sons, Bill France Jr., and Jim. The current structure has Bill France Jr.’s son, Brian, running NASCAR, while his daughter, Lesa, controls International Speedway Corp., the sister company that owns many of the venues. Jim France runs the IMSA sports car series.

The exact ownership stake has never been revealed. ESPN reported that the France family owns 74 percent of the stock, though the Wall Street Journal reported last year that Brian France had sold his stake in the stock car series. However, Jim France sounded committed to motorsports when he announced the purchase of ARCA.

”Our business is racing, that’s what we’re investing in,” Jim France said. ”We’ve done it all of our lives, and we’re going to continue to do it.”