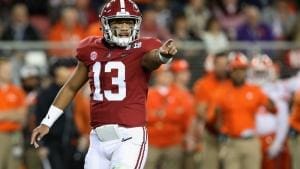 
Alabama finished the 2018 season with a 14-1 record — their only loss coming in the College Football Playoff national championship, which they lost to Clemson, 44-16.

The Crimson Tide haven’t had more than one loss in a season since 2014. Will they continue that streak this year?

Here’s what Alabama fans need to know heading into the 2019 season.

Here is the full, detailed schedule for Alabama’s 2019 football season:

You can find tickets to each of Alabama’s home games here. Prices range from $35 to $140 for single game tickets.

The Crimson Tide went 14-1 last year, beating their opponents by an average score of 46-18.

Here’s what happened in every game of Alabama’s 2018 schedule:

But the Crimson Tide lost another big name to transfer: Jalen Hurts. The quarterback transferred to Oklahoma after the 2018 season for his final year of eligibility.

So who are the top stars returning for Alabama:

Quarterback Tua Tagovailoa had a record-setting year as a sophomore in 2018, throwing for 3,966 yards, 43 touchdowns, and 6 interceptions while finishing second in Heisman voting behind Oklahoma’s Kyler Murray.

Defensive end LaBryan Ray had 39 tackles and 2 ½ sacks last year and will have big shoes to fill in the absence of Quinnen Williams.

MORE SEC: 14 SEC players who could have breakthrough seasons

We have Alabama sitting at No. 2 in our preseason Top 25. Here’s that breakdown:

Nick Saban hasn’t gone two consecutive years without a national title since the 2013-14 seasons. Whenever there are doubts about the Tide’s dynasty ending, Alabama seemingly returns to the top. But for the first time since that 2009 title, Saban’s bunch has competition as the sport’s dominant program. With QB Tau Tagovailoa, WR Jerry Judy and LB Dylan Moses among the returning stars, another ‘Bama-Clemson showdown might be on the way.