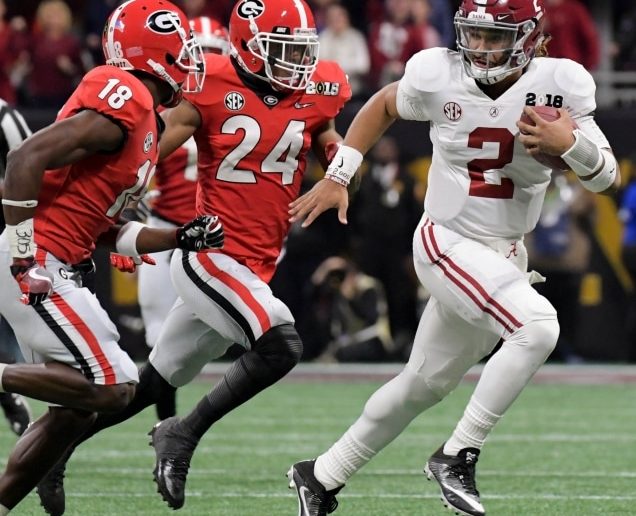 
TUSCALOOSA, Ala. — Jalen Hurts is the strong-armed running threat who has mostly won during his Alabama career.

Tua Tagovailoa is the prized, left-handed recruit who rallied the Crimson Tide to a national championship.

The Crimson Tide has two good options to choose from, and the decision will be based on what everything is at Alabama: Victories that make the Tide national and Southeastern Conference title contenders.

And. It. Begins. Jalen Hurts and Tua Tagovailoa begin their competition to be named QB1 of the Crimson Tide #RollTide pic.twitter.com/QSlhBmxcml

“A guy that wins,” is how offensive coordinator Mike Locksley boils down what the Tide’s looking for.

Both players seem capable of doing that, even if they have different styles and strengths.

Greg McElroy, SEC Network analyst and former Alabama quarterback, figures it might come down to whether Tide coach Nick Saban wants to bank on the defense and go with the quarterback who makes the fewest mistakes or turn to the one with more of a gunslinging style.

While Tagovailoa is the presumed front-runner, McElroy believes it remains “very much up in the air” who will start the opener against Louisville in Orlando.

Hurts was only intercepted once last season and has gone 13-1 as a starter in each of his first two seasons with a pair of trips to national title games.

“Now, if I were to handicap it myself, I would say Tua would probably have the inside track just given how he played against one of the best defenses in college football last year,” said McElroy, who led Alabama to the 2009 national championship. “But I also know that Jalen did a great job in providing the team exactly what it was they needed in the (13) games leading up to that championship game.

“I don’t think it’s as clear-cut as everyone else seems to think it is but I still think that Tua would have the inside track.”

Tagovailoa passed for three touchdowns after halftime of the title game against Georgia’s stingy defense, including the 41-yard winner to fellow freshman DeVonta Smith in overtime.

He also was picked off once and was sacked on the play before the TD strike.

“We have film of good, bad and ugly and that’s definitely been on the ugly,” Tagovailoa said. “It’s most definitely something you can learn from. Instead of taking a sack, throw the ball away.”

Hurts has struggled in four playoff games, totaling just 329 passing yards while also making some plays on the ground and being named offensive MVP of last season’s semifinal game.

But he was the SEC offensive player of the year as a freshman. He has run for 1,809 yards and 21 touchdowns in two seasons, though his passing yards per game dipped last season from 185.3 to 148.6.

Hurts vented over the weekend about Alabama’s handling of the quarterback situation and comments from Saban, saying he told Saban in June that he would remain this season and not transfer.

One thing he insists he’s not sweating: competition.

Jalen Hurts runs the ball during the second quarter of the 2018 national championship game against Georgia.

Tagovailoa, a former five-star recruit from Hawaii, showed off plenty of ability in backup duty as a freshman last season. He passed for 636 yards with 11 touchdowns and two interceptions, one of which was returned 93 yards for a touchdown in a blowout of Tennessee.

He didn’t bite on a question at Saturday’s media day about what it will take for him to be named starter.

“For me, I’m not really focused on winning the job,” Tagovailoa said. “I don’t think that’s ever been in my persona. I think what we have to do as a team is what’s most important to me. We’ve got to focus on what we can do now to better ourselves, better each other.

“As the season goes on, we’ll see and what-not.”

It is clear who will choose the winner. Saban says there will not be “a straw poll,” and Locksley says it’s the head man’s call.

He did praise both candidates’ approaches and work ethics, with his comments coming shortly before Hurts aired his grievances.

“First and foremost, I think both guys have been pros in terms of how they’ve gone about competing,” said Locksley, who coaches wide receivers. “Both those guys put the time in, they both are students of the game, they spend a lot of time upstairs in the coaches’ offices trying to improve themselves.”

And trying to emerge as the on-field leader of the title favorites.