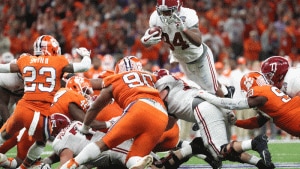 Some things don’t change. Alabama and Clemson will again meet in the College Football Playoff, this time for the national championship, as the two college football powers add to their series history.

Find the all-time series history below. The teams first met in 1900 — and will now have met in the College Football Playoff in each of the last four years.

Alabama has dominated the series historically, going 14-4-0 in the 18 meetings. The Tide and the Tigers first met in 1900.

Though the Crimson Tide have 14 wins in 18 meetings with Clemson, the Tigers were the dominant force at the start.

However, after going 3-for-3 against Alabama, Clemson didn’t beat Alabama again until 2017, as the Tide won 13 in a row.

In fact, in Alabama’s first seven wins during the stretch, the Tide shut out the Tigers in six of seven meetings. The one time Clemson scored…it lost 74-7 in 1931.

MORE: How every conference has done this bowl season

However, after Alabama beat Clemson 56-0 in Tuscaloosa in 1975, they didn’t play each other again until Aug. 30, 2008, when Alabama opened the season with a 34-10 rout. Later that season, Clemson coach Tommy Bowden resigned. The Tigers started the season ranked in the top 10 but were only 3-3 when he resigned.

Swinney went 4-3 the rest of the season and went on to face ‘Bama for the College Football Playoff national title for the 2015 season, a 45-40 win by the Tide.

Clemson then ended the winless drought against Alabama by winning in a thriller, 35-31, on a late touchdown pass by Deshaun Watson to Hunter Renfrow to win the CFP national title.

Last season, Clemson and Alabama had another rematch, though this time in a CFP semifinal. Alabama dominated, 24-6.

Now the Tigers and Tide are ready to meet again, with another national title on the line.