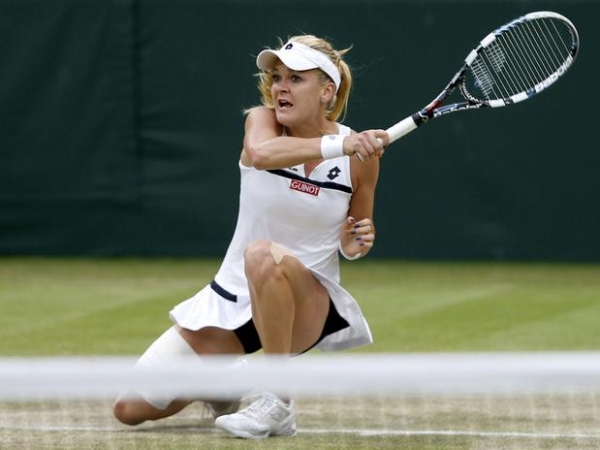 Poland’s Agnieszka Radwanska was thrown out of a catholic youth group after her nude photo shoot in ESPN The Magazine’s Body Issue went public (Photo : Reuters)

For Agnieszka Radwanska, the No. 4 women’s tennis player in the world, nudity and Catholicism don’t mix.

Several media outlets reported Monday that the 24-year-old Radwanska fell out of favor with a Catholic youth group in her native Poland after posing nude (in a non-explicit photo) for ESPN The Magazine’s Body Issue. She is sitting in a lounge chair by a pool holding two tennis balls with more tennis balls floating on the water.

According to The Daily Mail, the youth group Krucjata Mlodych (Youth Crusade) condemned the shoot , which was made public last week, as “immoral behavior” and dropped her from its campaigns.

The Daily Mail said Radwanska had starred in a commercial for the group where she spells out “Jesus” with tennis balls and tells people not to be ashamed of their faith.

The newspaper quoted Senior Catholic Priest Father Marek Dziewiecki, who said, “It’s a shame that someone who has declared their love for Jesus is now promoting the mentality of men looking at a woman as a thing rather than a child of God worthy of respect and love.

“If she meets a man who she can truly love and establish a happy family and raise Catholic children, then she would probably have to hide these pictures from relatives.”

According to the Daily Mail, Poland is a strongly religious country in which 90 percent of the population declare themselves as Catholic.

She also told ESPN The Magazine that she has a routine of filling up on food around half an hour before her matches.

‘Unlike most players, who eat at least two hours before matches, I can eat a full meal and go straight out on the court. In fact, I prefer to do that,” she told the magazine, The Daily Mail reported.

Radwanska recently had stirred pride in her homeland with her semifinals finish at Wimbledon last month. According to the Wall Street Journal, she was unavailable for comment on the controversy involving her photo shoot.