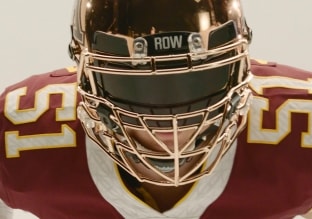 From new brands to new color schemes, from reworked classics to traditional logos, few sports see the creativity and variety in uniforms that college football showcases.

RELATED: Who has the best uniform in DII football? | Best FCS uniforms

Here are some of our favorite new threads that teams will be debuting in the 2018-19 season, in alphabetical order:

The Block C was around for a lot of W’s! It’s back on our helmet for select games this season! Stay tuned for more info.#UConnNation // #RiseAsOne pic.twitter.com/QEKgd4UkdH

Florida is just the latest school to move to Jordan Brand, and at the SEC media day, the Gators unveiled their new look. The uniform hasn’t changed much, but new color combinations were released, and the event was just a tease of what we’ll see week in and week out from Florida.

67 days till we unleash the new Vapor Elite pic.twitter.com/gFcAtoyNQK

This fall we’re debuting a whole new look by connecting our past, present, and future with an all-new #Gophers @usnikefootball uniform combination.

The Gophers released three new jerseys, three helmets, and four pairs of pants this offseason, bringing their number of total jersey combinations to more than 100. One of the highlights of the new package is the gold chrome helmet — a sleek futuristic look.

NC State seems to be embracing the alternate logo, sticking with Tuffy on the helmets this season. The wolf head also appears on the pants now, where “Wolfpack” replaces what used to be a stripe. Speaking of stripes, there are new ones around the collar. This is definitely one of the most unique uniforms NC State has ever had.

Add another team to the Jordan Brand list. The Sooners’ new uniforms feature a slight font change and a fatter helmet logo. Luckily, the classic cream alternates — one of the best in the sport — stay relatively untouched.

The wait is over!

This season marks the first that South Florida is playing under the Adidas brand after switching from Under Armour. Though we haven’t gotten a full look at the uniforms yet, one major change is apparent. Gone is the “USF” logo on the chest, replaced by “South Florida.”

Can’t wait to break these in Sept 1st!

The Owls get a completely new gray alternate this year to go along with the black uniform added in 2016. On all jerseys, new diamond accents appear on the front.

THIS IS THE NEW STANDARD
pic.twitter.com/ofzAsF1lKL

The Cavaliers embrace history with their new uniforms, adding 10 stars to the collar to represent Virginia being the 10th state in the union. They’re also adopting a new font, which Nike calls “chiseled marble.”