7 things that stand out in KenPom's preseason college basketball rankings

Here are seven things that stand out.

Syracuse is ranked 16th in the AP Poll, but KenPom’s projection model is higher on the Orange than those voters.

The defense is the main reason why. KenPom projects the Orange to have the No. 3 defense in the country; they finished fifth on that end last year. The offense is a bit of a question mark, but Jim Boeheim has ideal personnel for his 2-3 zone. These guys are long, smart and athletic. Oshae Brissett looks like he was born to play in this system. Paschal Chukwu has offensive limitations, but he’s one of the best rim protectors in the country. Tyus Battle and Frank Howard are active and intuitive up top.

KenPom expects Syracuse to finish 17th in offense this year. That’s a bit surprising. The Orange finished 135th on that side last year. They return all of the same personnel while competitors are losing key players, so Syracuse should certainly improve. And it has the talent to finish in the top 20 on offense; the Orange made the Sweet 16 and looked much more comfortable on that end down the stretch.

But they’ll need to cut down on turnovers and shoot a higher percentage from 3 in order to reach that clip. Regardless of all that, Syracuse looks like it could have a big season despite playing in a loaded ACC.

KenPom isn’t as high on Gonzaga as AP voters

KenPom takes strength of schedule into account, which hurts Gonzaga even though it runs through the WCC year after year. The Bulldogs were ranked third in the AP Poll and check in at No. 9 in KenPom’s rankings.

The truth is, after Kansas and Kentucky, you could make arguments to place teams three through 10 in whatever order you want. We know Gonzaga is going to be good. It lost Johnathan Williams, but any team that returns Josh Perkins, Zach Norvell, Killian Tillie and Rui Hachimura is going to be good. Throw in the fact that Mark Few is their coach and they play in the WCC, and this team is going to pile up a ton of wins.

The question is how far the Bulldogs can advance in March. They finished 10th in KenPom last year and reached the Sweet 16. Williams is a significant loss, but factor in internal development from the rest of the roster, and it’s fair to expect Gonzaga will be about as good as it was last year.

Nevada is projected to have the best offense in college basketball

The Wolf Pack are going to be an absolute blast to watch. They return most key pieces from last year’s No. 7 offense and add highly-touted freshman Jordan Brown.

What’s nice about Nevada is that it can play big while having the benefits of playing small. That’s what happens when your wings and big men can shoot and penetrate. Something else to keep an eye on: the Wolf Pack turned the ball over less than anyone in college basketball last season. Ball security may not be sexy, but it matters. The first step to having a great offense is getting as many shots at the rim as possible.

Nevada has some interesting nonconference games in Loyola Chicago, USC and Arizona State. We know the Wolf Pack will put up numbers in conference games, but keep a close eye on those. Nevada doesn’t play super fast; it ranked 105th in pace last year, which is normal. So it won’t be putting up 100 points per night even if it has the best offense in the country. But in terms of efficiency, there might not be a better unit.

Kansas is projected to have the best defense 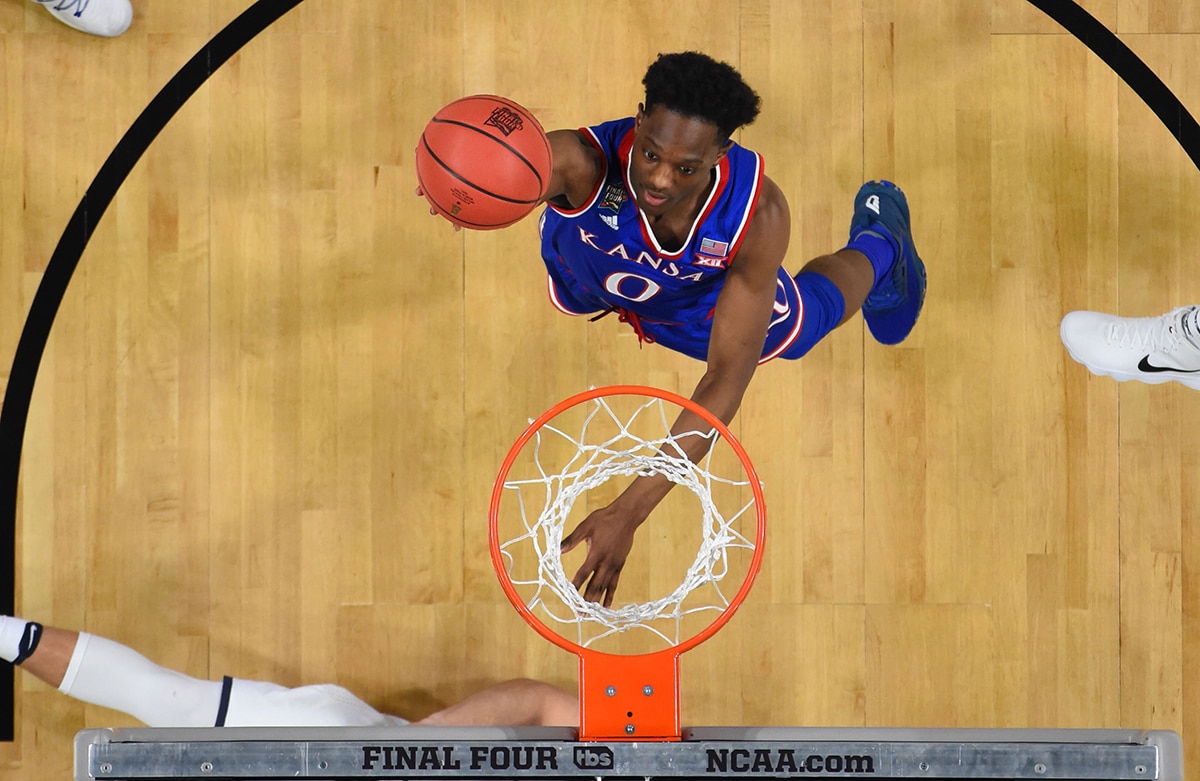 Marcus Garrett goes to the hoop against Villanova in the 2018 Final Four.

Kansas is going to be a scary defensive team. The combination of size, experience and quickness is unmatched around the country.

Bill Self will have plenty of lineup options at his disposal, but how about this one: Marcus Garrett, LaGerald Vick, K.J. Lawson, Dedric Lawson and Udoka Azubuike. That crew can switch across four positions and has a stud rim protector to erase any mistakes. Not that there would be many.

Kansas has had to play smaller than it prefers in recent years. Vick played minutes at the four last year; he’s probably a natural shooting guard. Josh Jackson played power forward for the Jayhawks the year before that.

Dedric Lawson is a plus athlete, but also has great positional size for that spot. Kansas has a real shot to make this prediction come true.

Last year’s feel good story is unranked in the AP poll, and you have to scroll pretty far down to find the Ramblers on KenPom.

Loyola Chicago made the Final Four last season but loses several key pieces in Donte Ingram, Aundre Jackson and Ben Richardson. The thing is, the Ramblers will still be good. Marques Townes, Cameron Krutwig and Clayton Custer are back, and they should still run through their conference. Porter Moser is a rising star of a coach.

They’re just a tricky team to rank. The Ramblers still only finished 31st at KenPom last year despite being one of the final four teams standing. Strength of schedule had plenty to do with that. Loyola Chicago also won a lot of close games, which is good, but will hurt you when it comes to predictive models.

The Ramblers have a good chance to repeat their regular season success and will probably return to the NCAA tournament. Whether or not they can make another deep run is to be determined. There are reasons to like this team, but its losses are significant and can’t be overlooked. 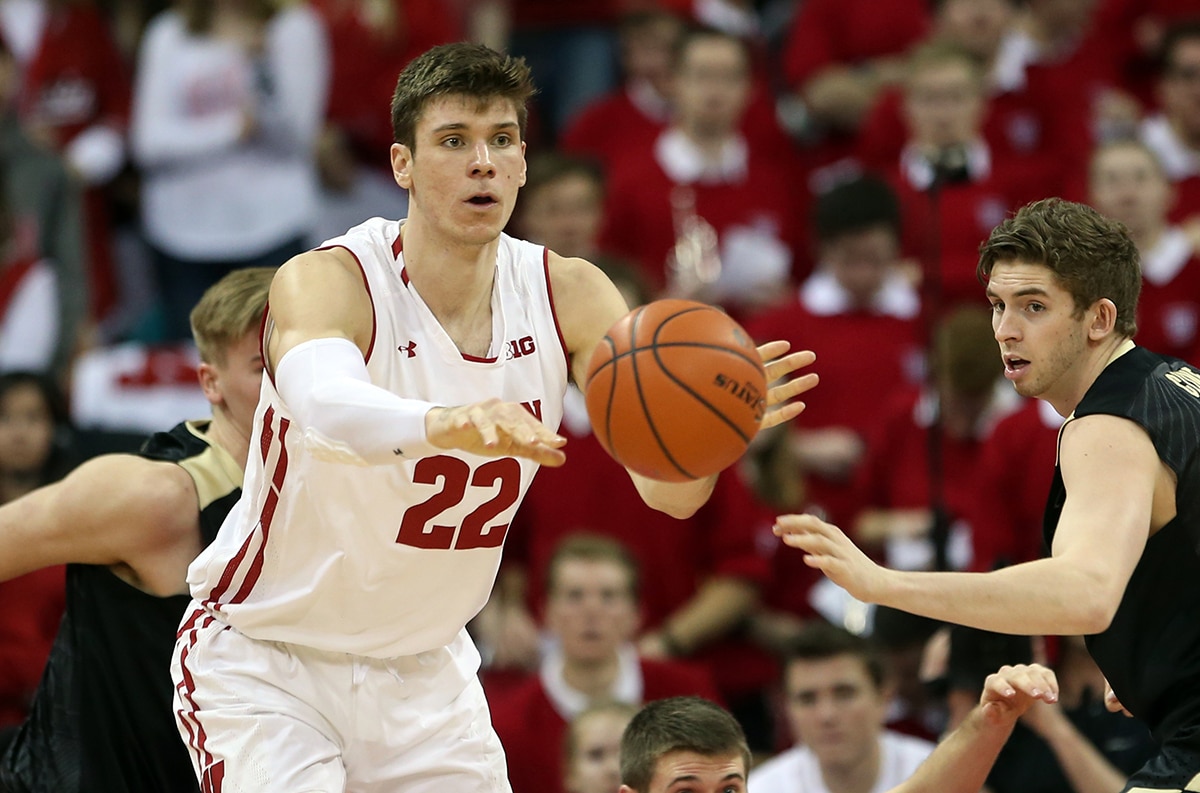 Last year was uncharacteristic for Wisconsin. The Badgers finished 70th in KenPom and stumbled to a 15-18 record.

But the model is bullish on the Badgers this year. Several key pieces, including potential first-team All-American Ethan Happ, return. Wisconsin is predicted to finish 18th in offense and 27th in defense.

Wisconsin had some bad luck in close games last year, which is part of the reason why it’s fair to be excited about the Badgers in 2018-19. They lost eight games by five points or less last season. Flip a few of those outcomes, and their year doesn’t look as bad. Factor in some internal development and another year under Greg Gard’s belt, and Wisconsin should return to the NCAA tournament after a year hiatus.

Duke is ranked second, ahead of Kentucky

This is interesting. As mentioned before, Kansas and Kentucky are the consensus top two teams most places you look. But KenPom likes the Blue Devils more than the Wildcats.

Duke probably has the highest ceiling in the country, so this is not outlandish. But it’s surprising given what you’d expect from KenPom rankings. Teams like Syracuse and Kansas State, which return just about their entire rosters, have favorable rankings. That makes sense because it’s hard for a statistical model to properly evaluate incoming freshmen. We haven’t seen them play an NCAA minute, even if they’ve dominated exhibition games.

But the model does factor in freshmen, so KenPom is clearly high on R.J. Barrett, Zion Williamson and Cam Reddish. Perhaps even higher than most, because everyone likes those guys. And Duke doesn’t have much in terms of returning talent. Kentucky has more experience.