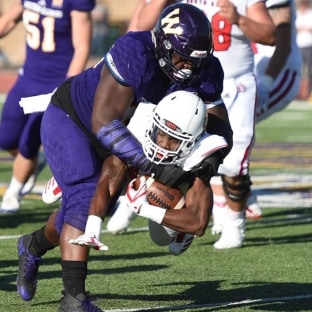 7 potential FCS over FBS upsets that may happen in 2018

Here are seven FCS vs. FBS matchups in 2018 that may result in FCS wins:

Kennesaw State has quickly risen in the FCS ranks. Entering its fourth year in the FCS, the Owls come off a 12-2 season that ended in the national quarterfinals. Now they’ll get a shot at Sun Belt member Georgia State, its first-ever FBS opponent.

Georgia State won its first bowl game in program history at the AutoNation Cure Bowl last season and placed five members on the preseason All-Sun Belt team. But the Panthers fell to an FCS squad in last season’s opener against Tennessee State 17-10.

The 2016 national champion Dukes have lost just once in their past 27 games — JMU fell to North Dakota State in last year’s national title game. This stretch included a dominating 34-14 season-opening win at FBS opponent East Carolina in 2017.

Despite losing its starting quarterback Bryan Schor and some pieces on the defense, James Madison will be an FCS force again in 2018, coming in at No. 2 in the preseason STATS FCS top 25 rankings. The Dukes boast five preseason All-American choices, including two members of its ball-hawking secondary that helped cause an FCS-record 44 turnovers last year.

Holding NC State’s offensive attack in check will be a tough task. The Wolfpack finished 9-4 last season and return quarterback Ryan Finley to the fold.

Back in 2016, James Madison’s offense put up 28 points against another ACC opponent in North Carolina, but its defense was smacked for 56 points in Chapel Hill. That defeat marked the Dukes’ only other loss in their remarkable 28-2 run over the past two seasons.

With just 26 days until kickoff, the Dukes will enter their 26th season as a member of what is now @CAAFootball as three-time defending league champions!#GoDukes pic.twitter.com/q9mzg3O1l6

The Jackrabbits were the only team to take down national champion North Dakota State last season. Coming off a national semifinals appearance, SDSU now enters 2018 as the No. 3 team in the nation in the preseason STATS poll.

Quarterback Taryn Christion will be without his most reliable receivers from last season, graduates Dallas Goedert and Jake Wieneke, but still possesses the tools to build on last year’s 11-3 campaign where he accounted for 44 total scores.

Last year was a major stepping stone for the Big 12’s Iowa State, who finished 8-5 with big upsets over then-No. 3 Oklahoma and then-No. 4 TCU. But the Jackrabbits may be able to make some noise against the Cyclones, who have a road game at in-state rival Iowa and a home contest against Oklahoma to look forward to right afterwards on its grueling schedule.

MORE: Why North Dakota State will win again in 2018 | Why they won’t

Northern Arizona perhaps has the best chance of any FCS school to unseat an FBS opponent this season. UTEP was the only winless FBS team in the country (0-12) and averaged a nation-worst 11.8 points per game in 2017.

Meanwhile, Northern Arizona participated in its first FCS playoffs in four years last season while putting up 30.3 points per game. No matter the difference in divisions, this seems like a severe mismatch on paper.

Quarterback Case Cookus leads the charge for Northern Arizona as one of the myriad of returning starters in 2018. Cookus threw for 3,413 yards and 22 touchdowns last year as a redshirt sophomore.

The first NAU Football practice is in the books! 19 more sessions to go before it will be @UTEPFB Week! Practices will take place at 10 am Monday-Saturday at the Skydome! #NAUStrong pic.twitter.com/mvt5gXSae3

Defending Celebration Bowl champion North Carolina A&T came in at No. 14 in the first STATS preseason poll after a 12-0 finish last year. This year, the Aggies will head to Greenville, North Carolina to play ECU, who got trounced by 20 points vs. James Madison at home last season.

History is beside the Aggies, who’ve beaten an FBS foe in two straight years. North Carolina A&T handled Charlotte 35-31 in 2017 and Kent State 39-36 in four-overtime thriller in 2016.

The Pirates finished with the worst scoring defense last year at 45 points allowed per game and were picked to finish last in the preseason AAC media poll. Along with Northern Arizona, North Carolina A&T has one of the easier paths to continuing the trend of FCS over FBS victories.

Nicholls has caused quite a stir the past two seasons against SEC squads. Last year, the Colonels battled Texas A&M to a close 24-14 loss in Week 2. Then back in 2016, Nicholls fell just short of a shocking upset over Georgia. The Bulldogs ultimately won 26-24 in Athens behind two quick third quarter scores.

This season, the Colonels will face a Big 12 team in Kansas who’s won just three games over the past three years. The Jayhawks finished just above ECU in points allowed per game last year with the nation’s second-worst mark of 43.4.

Nicholls returned to the FCS playoffs in 2017 for the first time in 12 years. The Colonels placed 17th in this year’s preseason STATS poll.

Western Illinois is another FCS squad with recent success against the upper level. The Leathernecks blasted FBS newcomer Coastal Carolina 52-10 last year and knocked off Northern Illinois the year prior.

Big Ten opponent Illinois was picked to finish 12th out of 14 teams in the preseason conference poll and is without a proven quarterback entering coach Lovie Smith’s third season at the helm. The Illini shut out WIU 44-0 in their last meeting in 2015, but expect this year’s matchup to be much more competitive.

Jared Elliot takes the reins this year after former head coach Charlie Fisher left for a staff position at Arizona State. It’d be quite a start to Elliot’s tenure to pick up a win over an in-state Big Ten team in Week 2.