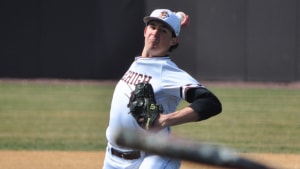 
Last week at NCAA.com, we dove into the home run and batting average numbers in finding the hottest bats in the Cape Cod Baseball League. This week, we turn our attention to the pitchers.

The Cape Cod Baseball League has become a haven for breakout stars heading into each new college baseball season. Here are a few pitchers who will certainly make things interesting for the coming 2020 season.

SUNS OUT, BATS OUT: 9 red-hot hitters in the CCBL

Black earned the starting All-Star nod for the East Division. The right-hander had a nice freshman campaign for Lehigh, working his way into the back-end of the rotation for five starts. His numbers this summer have been solid, posting a 3-0 record with a 1.70 ERA and 29 strikeouts in 26.1 innings pitched. He’s let up a few runs of late — five earned over his last 16.2 innings — but has been solid overall for Brewster.

Bedell will be on the bump opposite of Black in the July 21 CCBL All-Star Game. The sophomore righty emerged as a reliable bullpen arm in 2019, posting a 1.56 ERA with five saves and 36 strikeouts in 40.1 innings. He has been simply amazing as a starter on the Cape, allowing two earned runs this season — both in the same July 5 start — over five CCBL starts. He has been in command as well, striking out 28 and walking just three in 25.2 innings pitched.

The big, freshman righty — listed at 6’6” and 220 pounds — had a strong debut campaign for the Panthers in 2019, but has been even better on for Falmouth. Aleman has yet to allow an earned run in four starts, most recently going seven shutout innings with six strikeouts and just one walk on July 15. His teammate Logan Allen was off to a strong start as well before heading on the summer tour with Team USA. These two could make FIU real sleepers this season.

Well, when it comes to pitching, we all love strikeouts. Seymour makes the list for leading the CCBL in Ks heading into Sunday’s All-Star Game. The rising junior lefty led the Hokies in strikeouts in 2019 with 81 in 70.1 innings pitched, so it’s not totally surprising he leads the CCBL. Where he has been impressive is limiting the walks. On the season, he is 2-2 with a 2.8 ERA and a 39-to-6 strikeout-to-walk ratio over 25.1 innings pitched. He’s pitched consecutive shutout appearances, striking out 16, walking just three and allowing a mere four hits over those 11 innings.

The Cardinal could have a very solid pitching staff come 2020, and if Palisch continues to improve this summer, he will only make it stronger. Palisch, who is also a CCBL All-Star, has tossed the Cape’s only complete game shutout of the season (of the seven-inning variety). And he did so in dominating fashion, striking out 10 and walking none. On the season, he’s 3-1 with a 1.22 ERA and 26 strikeouts to just three walks across four starts.

LOOK AHEAD TO 2020: Early preseason top 25 | 7 teams that may win their first College World Series

The right-hander had an up-and-down freshman campaign, primarily coming out of the bullpen for the Longhorns in 2019. He’s making a case to move into the rotation with five solid starts for Chatham this summer. Kubichek has allowed just two earned runs in his last three starts — striking out 20 and walking just three over that same span — and has a 1.08 ERA with 29 strikeouts in 25 innings pitched so far.

Kolby Kubichek (@TexasBaseball) is an All-Star. The right-hander replaces Parker Scott on the East Division squad.

After a much-improved sophomore year in 2018, Lardner put up a career-high ERA while proving to be a bit hittable, allowing a .279 batting average against in his 2019 junior follow-up season. He’s certainly righted the ship, as the junior lefty has allowed less than a hit per inning while walking two batters the entire summer (28 total innings). He’s gone at least six innings in each of his last three starts, allowing just three earned runs over that span.

All stats through games played July 15 per the official CCBL website.