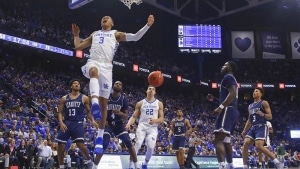 The Kentucky Wildcats are 8-2, but they haven’t gotten off to the kind of start that they’d hoped for. Kentucky was ranked second going into the season and currently sits at No. 19 in the AP Poll.

But the Wildcats still have plenty of talent, and they have a great opportunity to notch a signature win on Saturday when they face North Carolina. Here are five adjustments Kentucky can make that could give it a boost.

Kentucky’s 88-61 win over Utah on Saturday was probably its most impressive performance of the season, and it was Johnson’s best game, too. He scored 24 points on nine shot attempts.

The efficiency is great, but it makes you wonder: if Johnson had it rolling to that extent, why couldn’t he have gone for 30 or 40? The Utah game was an outlier, but Johnson has been awesome all season. He’s averaging 16.1 points and 5.6 rebounds while shooting 53.6 percent from the field and 43.8 percent from 3-point range.

Johnson is Kentucky’s best player, but he’s second on the team in shot attempts and is barely ahead of P.J. Washington and Reid Travis in that department. He should be leading the team in attempts by a healthy margin. John Calipari has always preferred an equal-opportunity offense, but that works better when you have multiple stars. The Wildcats took off last season once they allocated more shots to Kevin Knox and Shai Gilgeous-Alexander, while the complementary players settled into their roles. They’d be wise to do the same thing this year.

One way to get Johnson more involved: let him run more pick-and-rolls. That may happen organically since Quade Green transferred, but Kentucky hasn’t gotten much out of the point guard position in general. Johnson is an expert cutter and a lethal spot-up shooter; that’s how he gets most of his offense now. But perhaps Calipari could let him create for himself more often.

For everything we just said above, Kentucky’s offense has actually been good. It ranks ninth on that end, even if it has the talent to be better. But the defense has been an issue.

The Wildcats rank 53rd on that side, which would be the team’s worst defensive finish under Calipari since 2012-13. The main culprit: Kentucky is getting scorched from behind the 3-point line. Kentucky has the No. 325 3-point defense in the country, allowing foes to make 39 percent of their attempts from range.

Some of that is bad luck. Opponents are hitting their open 3s at a very high rate against the Wildcats. But a lot of it is a result of overhelping.

Take this clip against Seton Hall, for instance. Ashton Hagans gets beat off the dribble (another problem we’ll touch on soon) but E.J. Montgomery is in solid position to contest the driver at the rim. Instead, Johnson unnecessarily helps off his man in the corner, which leads to a wide-open 3:

The good news: Kentucky is young, and it will figure some of this stuff out with more reps. But they aren’t playing on a string right now. Knowing when to help and when to stick to your man is extremely important.

3. Emphasize staying in front of ball-handlers, or switch more

Part of the reason Kentucky has developed a habit of overhelping is because there is a reason to help too often. Perimeter defenders are getting broken down off the dribble with ease, and the collective ball-screen defense has a ways to go.

This crucial possession in overtime against Seton Hall is a good example. The sequence starts with a Pirate guard blowing by his man. This time, Johnson does a better job of stunting and recovering to his guy in the corner. But it’s chaos from there.

Kentucky falls for stuff like that too often. It needs to trust its lateral athleticism more instead of going for highlight-reel swats. Switching more could help, but that’s unlikely. Calipari rarely does it, nor should he need to. You shouldn’t have to switch when you have a size and athletic advantage, as Kentucky almost always does.

Discipline is the real key. Fortunately for the Wildcats, that can be learned.

4. Crash the offensive glass even more

The main reason Kentucky’s offense has been good: offensive rebounding. The Wildcats retrieve 43 percent of their own misses, which ranks third in the country. Travis, Washington, Montgomery and Richards are all plus offensive rebounders.

But there’s reason to think Kentucky can be even more aggressive crashing the glass. Opponents aren’t beating them in transition. Foes are averaging 17.5 seconds per possession against the Wildcats, which ranks 245th in the land. The only reason to avoid chasing offensive boards is a fear of getting beat on the fastbreak. But teams are so scared of Kentucky’s big guys that they are (rightfully) hesitant to run.

This obviously isn’t a weakness for Kentucky, but there’s something to be said for doubling down on your strengths. Perhaps with a little more emphasis here, the Wildcats could lead Division I in offensive rebounding rate.

Despite everything going in Kentucky’s favor last season, it wasn’t a good shooting team. That was the Wildcats’ ultimate downfall.

A reason why many were more optimistic about Kentucky going into this season was because it added shooting, and that’s manifested thus far. The Wildcats are making 36.9 percent of their 3s, an above-average clip.

But they don’t take enough of them. Only 29.4 percent of their shots come from behind the 3-point line, which ranks 337th. That’s typical of a Calipari offense, but considering their struggles defending the 3, Kentucky is just losing the math battle too often. And surprisingly enough, its two starting big men have been really good from distance. Travis is shooting 50 percent from 3, while Washington is at 47.1 percent.

The sample sizes are small. Travis averages 0.8 attempts per game; Washington is at 1.7. Increase them, and those percentages might dip. But that’s OK. If those guys can hover in the mid-to-high 30s, it will juice the offense. First, those are profitable shots. Second, having big guys who can step out and hit the 3 unclogs driving lanes and makes life easier on everyone. Travis and Washington would have more interior space to work with themselves.

These guys don’t need to be heaving five 3s per game. But if they each landed in the two-to-three range, Kentucky could make a jump offensively.