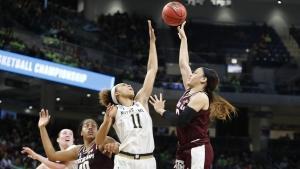 
Women’s college basketball will have a new leading scorer next year. Megan Gustafson is graduated and gone after a career at Iowa that led the Hawkeyes to retire her jersey shortly after her playing days were over.

The 6-foot-3 Gustafson guided Iowa to the Elite Eight this past season, scoring 1,001 points along the way for a 27.8 points per game average, which was 2.6 points better than anyone else in the nation.

RISING STARS: 5 players poised to break out in 2020

But the sport isn’t just losing Gustafson. Of the 20 leading scorers in women’s college basketball in the 2018-19 season, 17 of them were seniors playing their final season of college ball. Which leads to the question: Who’s ready to grab the scoring title in women’s basketball?

Is it Aari McDonald? Is it triple-double queen Sabrina Ionescu? Is it someone else?

Here’s a look at the numbers and a few candidates to score the most points next season.

Carter had a stellar sophomore season for the Aggies, being named an All-American and being voted to the All-SEC First Team. She already owns Texas A&M’s top two single-season scoring averages, posting 22.7 points per game as a freshman, then putting up 23.3 as a sophomore. Can she increase that number as a junior? It’s possible.

A 5-foot-7 product of Mansfield, Texas, Carter guided the Aggies to 26 wins and an appearance in the Sweet 16 this past season. She steps up in big games too, as she has averaged 31 points per game across the first six NCAA tournament games of her career. Carter is a decent three-point shooter too, knocking down 35.2 percent of her attempts last season and connecting on seven in the Aggies’ NCAA tournament loss to Notre Dame.

Carter finished sixth in the nation in scoring last season, 4.5 points behind Gustafson.

Put on for the Stars and Stripes 🇺🇸

Texas A&M guard @ChennedyCarter was one of 36 athletes selected to take part in trials for the 2019 U.S. Pan American Games Women’s Basketball Team.

If it weren’t for Gustafson and Buffalo’s Cierra Dillard, McDonald’s 24.1 points per-game would have led the nation in scoring. Instead, she led the Pac-12 and settled for the country’s third best. Not too bad for a sophomore.

A 5-foot-7 native of Fresno, California, McDonald transferred to Arizona after spending her freshman season at Washington, where she was a member of the Pac-12 All-Freshman Team. This past season, she set Arizona’s single-season scoring record with 890 points, was an honorable mention All-American and was an All-Pac-12 defender.

McDonald led Arizona to 24 wins this past season, a campaign that included a WNIT title. McDonald put up 19 points in that championship win over Northwestern. If McDonald’s game continues to grow, she could lead the Wildcats on an NCAA tournament run next season.

Dungee’s 20.5 points per game last season were 20th in the nation, but third among players who weren’t seniors. With the Razorbacks, she was named to the All-SEC Second Team and the SEC all-tournament team. Dungee scored in double figures in 34 of Arkansas’ 37 games, including 19 games in which she scored more than 20 points.

A 5-foot-11 native of Sapulpa, Oklahoma, Dungee started her career with the Sooners and was named to the All-Big 12 Freshman team in 2017. With the Razorbacks, Dungee has established herself as a big-game player and led Arkansas on an improbable SEC tournament run this past season.

OFF THE BENCH: Baylor’s Nalyssa Smith stepped up in the national championship

Despite going 6-10 in SEC play in the regular season, Arkansas upset Georgia, South Carolina and Texas A&M to earn a spot in the conference tournament title game against Mississippi State. The Razorbacks lost there, but it capped off a stretch of four games where Dungee averaged 25.7 points. She then helped the Razorbacks win a pair of WNIT games against Houston and UAB.

With Arkansas’ second leading scorer Malica Monk graduating, Dungee could be taking more shots next season, which could lead to more points and more wins for the Razorbacks.

No answer for the 31pts from @chelsea_dungee and them RAZORBACKS! Teams start BELIEVING IN MARCH 🙌😴 pic.twitter.com/WZimMLldR1