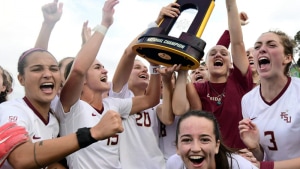 
The 2019 Division I Women’s College Cup will be held on Friday, Dec. 6 and Sunday, Dec. 8, in Avaya Stadium in San Jose, California.

Here is the full schedule:

*All times are Pacific time. All times, events, and locations are subject to change

In last year’s championship, Florida State took down North Carolina 1-0 in Cary, North Carolina. It was the Seminoles’ second title in program history, and denied the Tar Heels’ what would have been their 22nd.

Here’s everything you need to know about the Women’s College Cup:

How does the Women’s College Cup work?

The Women’s College Cup is comprised of the two semifinal games and championship game of the Division I women’s soccer championship tournament.

There are 333 women’s soccer teams in Division I that are eligible for competition in the tournament.

The tournament field and bracket will be announced on Monday, Nov. 11 during the selection show.

That same week, the tournament starts, with the first round taking place from Nov. 15 to Nov. 17.

FALL SPORTS: Check out the dates & times for every 2019 fall selection show

What is the full schedule for the Division I women’s soccer tournament?

Here is the schedule for the 2019 tournament:

How do I get tickets for the Women’s College Cup?

You can buy tickets to the 2019 Women’s College Cup right now by following this link.

Who has won the most national championships in women’s soccer history?

In 1982, North Carolina won the inaugural women’s soccer national championship, and carried that momentum through the rest of the century, capturing 16 of the first 19 titles in the sport. UNC has won five more since turn of the century, but are currently in the midst of their longest title drought in history, going six years without a championship since their last title in 2012.

MORE DI HISTORY: The 7 college coaches with the most Division I national championships

In total, only 12 schools have won a championship, with none other than North Carolina and Notre Dame having won more than two:

MORE RECORDS: The colleges with the most Division I championships

Here is the full list of every champion since the tournament’s inception in 1982:

*Declared champion on the basis of penalty kicks.

Where will future college cups be held?

The college cup’s schedule is planned through the 2021 season: