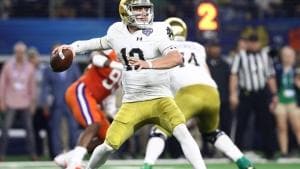 Will the Fighting Irish be chasing perfection in December once again this year?

Here’s what Notre Dame fans have to look forward to in 2019:

Here is the full, detailed schedule for Notre Dame’s 2019 football season, with past games and results first, then the TV schedule for future games below.

You can find tickets to each of Notre Dame’s home games here.

Here’s what happened in every game of Notre Dame’s 2018 schedule:

Quarterback Ian Book didn’t take over the starting job until week three of 2018, but still managed to pass for 2,628 yards, 19 touchdowns, and 7 interceptions (a 154.0 rating) in just 10 games. With Brandon Wimbush gone to UCF, Book enters 2019 as the obvious starter under center, which should allow for a breakout season for the junior.

Jafar Armstrong was playing second fiddle to Dexter Williams, but emerged as the top aerial threat out of Notre Dame’s backfield last season, catching 14 passes for 159 yards (an average of 11.4 yards per reception).

But where Notre Dame will shine next year will obviously be the defense, led in part by lineman Julian Okwara. Last year, Okwara had 26 solo tackles, including 12.5 for a loss, and eight sacks, and he also picked up an interception and a forced fumble.

We have Notre Dame sitting at No. 10 in our preseason Top 25. Here’s that breakdown:

Get ready for a slightly down year for the Irish. That trip to Georgia seems destined to end in a loss. And then there are brutal games at Michigan, Duke and Stanford. Seems like 9-3 is the end result. But there won’t be a collapse.

The College Football Playoff era is entering its sixth season in the 2019-20 season. Will it be the first season since the inaugural playoff that Clemson and Alabama are left out of either the CFP semifinal or national championship?

When are the 2019 College Football Playoff semifinals?