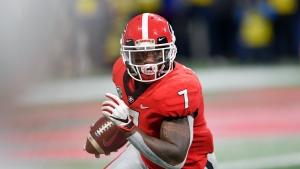 
After a 13-2 season that saw it lose in heartbreaking fashion to Alabama in the College Football Playoff, Georgia went 11-3 in 2018, falling to the Crimson Tide in the SEC Championship, shutting the door on back-to-back CFP appearances.

Can the Bulldogs make it back to the playoff for the second time in school history?

Here’s what Georgia fans have to look forward to in 2019.

Here is the full, detailed schedule for Georgia’s 2019 football season, with past games and results first, then the TV schedule for future games below.

You can find tickets to each of Georgia’s home games here.

The Bulldogs went 11-3 last year, losing to Alabama in the SEC Championship, and to Texas in the Sugar Bowl.

Here’s what happened in every game of Georgia’s 2018 schedule:

Backup quarterback Justin Fields saw a decent amount of reps for the Bulldogs last season, but after he transferred to Ohio State in the offseason, Jake Fromm will be in sole control under center. In his sophomore year, Fromm threw for 2,761 yards, 30 touchdowns and six interceptions, finishing with a rating of 171.3.

Running back D’Andre Swift had huge shoes to fill in 2018 after both Nick Chubb and Sony Michel left Athens, and he stepped up. Swift ran for 1,049 yards and 10 touchdowns, while catching 32 passes for 297 yards and three touchdowns. After losing Riley Ridley and Mecole Hardman to the NFL Draft, Swift will likely be a large part of the passing game for the Bulldogs this year.

But Georgia is going to get a big help in the run game from what is poised to be a stellar offensive line for the Bulldogs this season. And leading that line is tackle Andrew Thomas. Thomas started at left tackle in 13 games last season, and earned SEC Offensive Line Co-Player of the Week after a win against Kentucky that saw Georgia rush for 331 yards.

We have Georgia sitting at No. 4 in our preseason Top 25. Here’s the breakdown:

Perhaps no team had a more disappointing end to the season than the Bulldogs. First they blew a lead against Alabama in the SEC title game. Then they lost to Texas in the Sugar Bowl. But this team has the goods to write a different ending. QB Jake Fromm could make an earnest run for the Heisman, but he won’t have to do it alone. RB D’Andre Swift should be lethal from the backfield. There may not be a huge star on defense, but the overall unit will be extremely tough. Now it’s about finally beating ‘Bama.

The College Football Playoff era is entering its sixth season in the 2019-20 season. Will it be the first season since the inaugural playoff that Clemson and Alabama are left out of either the CFP semifinal or national championship?

When are the 2019 College Football Playoff semifinals?