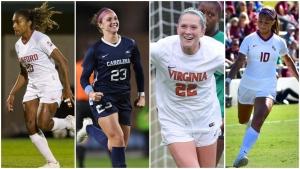 
The 2019 DI women’s soccer bracket has been announced. Out of the Pac-12 Stanford landed a No. 1 seed as an automatic qualifier after winning their conference. The Cardinal will play SWAC champion Prairie View A&M in the first round. Other No. 1 seeds include a trio of ACC teams — North Carolina, Virginia and Florida State.

First round action will begin Friday, November 15 with games being played between the 15th and the 17th.

For a high-resolution image of the bracket click here.

Other teams in Stanford’s quadrant of the bracket include Big Ten champion and No. 4 seed Penn State, SEC runner-up No. 3 seed Arkansas and the only undefeated team left in women’s college soccer No. 2 seed BYU.

The Cardinal finished their season as strong as they could — they won 13 straight matches and finished conference play undefeated in the Pac-12. Stanford will most likely face their first real test in the third round if the Nittany Lions can get there. Penn State started off the season a little slow, including opening the season with a 2-1 loss to Stanford. Now they are a force to be reckoned with, riding a nine-match winning streak with a Big Ten crown on their heads, the Nittany Lions could face a Stanford team led by defending MAC Hermann award winner and the Division I leader in assists Catarina Macario. Macario also leads the country in points (64) with 23 goals and 18 assists.

On the opposite side of the region No. 2 seed, BYU will face an early test in Mountain West champion Boise State. It’ll be a battle between two top-10 goal scorers in the Elise Flake from BYU (18 goals) and Raimee Sherle from Boise State (16 goals).

SEC runner-up No. 3 seed Arkansas also sits on that side of the bracket. The Razorbacks are coming off of a 1-0 loss to South Carolina in the SEC championship game, but their reputation as the only team to beat powerhouse North Carolina this year should send shivers down the spine of any opponent they face.

Louisville could also make noise in this region. The Cardinals have been ranked as high as No. 12 in the United Soccer coaches rankings this year and could play BYU as early as the second round.

Florida State shares its quadrant with No. 2 seed UCLA, No. 3 seed Wisconsin and No. 4 seed Washington. The Seminoles could see a test in Brown in the second round. The Bears emerged as Ivy League champions and sat at No. 17 in the latest edition of the United Soccer Coaches rankings.

On UCLA’s side of the bracket, the No. 2 seed could see a potential challenger in Lamar in the first round. The Southland champions currently have one of the best weapons in the game of college women’s soccer — Esther Okoronkwo. She leads the nation in goals scored (25). The road doesn’t get easier for the Bruins, as they’ll face either Clemson or Vanderbilt if they make it to the second round. The Tigers and Commodores were at one point threats to make a challenge for their respective conference crowns.

Another team to keep an eye on in this region is South Florida. The Bulls are led by Evelyn Viens, who is one of the top-scoring forwards in the game right now. She has 20 goals on the year. USF also just won the AAC, a conference that had No. 8 Memphis’ name written all over it throughout the season.

Virginia, who is fresh off their first loss of the season versus North Carolina in the ACC championship game, might have gotten the toughest draw of any of the other No. 1 seeds. If the Cavs can get past their first-round matchup in Radford, they’ll face the winner of Washington State and Memphis. Remember Memphis? The team who was No. 8 in the land prior tho the AAC tournament? The team who was a couple of goals away from potentially being considered for a top-three seed? Yeah, that team might play Virginia as early as the second round. I’m not sure who might need more luck, Memphis or Virginia.

On the flip side of the bracket, South Carolina and Kansas sit as the No. 2 and No. 3 seeds respectively. The SEC and Big 12 champions could play each other in the third round but will have to get past a couple of challengers first. The Gamecocks open play up against Southern conference champions Samford, as the Jayhawks face a foe out of the Big Ten in Iowa. With a seemingly simple path for South Carolina and Kansas, Xavier is a team to keep an eye on that side of the bracket, and as a sleeper team in general. The Musketeers are on a seven-match win streak including plowing through the Big East tournament where they shutout both Villanova and Georgetown 2-0. Xavier could meet Kansas in the second round.

North Carolina dethroned No. 1 Virginia in the ACC championship game to give the Hoos their first loss of the season. The Tar Heels are joined by Southern Cal, Oklahoma State and Texas Tech as the No. 2, 3 and 4 seeds respectively.

Looking at USC’s side of the bracket, they’ll face Big West champion Cal State Fullerton before potentially facing either Texas or Texas A&M. The battle between the Aggies and Longhorns is an intriguing one, as both squads were considered to have the talent be key competitors in the respective conferences and nationally. Texas is led by Haley Berg and Julia Grosso who have 25 and 23 points on the season respectively. A&M has Ally Watt and Jimena Lopez a pair of players who complement each other’s games. Watt has 15 goals on the season, as Lopez has 13 assists.

Other teams who could make some noise in this region are Texas Tech and Oklahoma State. The Red Raiders and Cowgirls were supposed to meet each other in the Big 12 final, but due to late-game heroics by Kansas against Oklahoma State and an upset by TCU over Texas Tech, the two fell short. Looking to bounce back, this pair of 2 and 3 seeds will face a tough road to the College Cup with Southern Cal and North Carolina more than likely waiting for them in their third-round matches.

CONFERENCE CHAMPIONS: Find out all the teams who automatically qualified for the tournament

The NCAA tournament field is made up of 64 teams, with 31 of those teams being automatic qualifiers. Automatic qualifiers obtain their bid by winning their respective conferences. Three AQs are granted to the regular-season champions of the Ivy League, Pac-12 and West Coast Conference since these three conferences don’t have tournaments.

The other 33 teams who did not win their conference are chosen on an at-large basis by the NCAA Division I Women’s Soccer Committee.

Below are the conferences that receive automatic bids into the NCAA tournament. Each conference title is linked with a bracket or championship hub for that respective conference.

(Note: Most early-round matches will take place at the campus of the higher-seeded team. The sites listed in the table below indicate the sites of the final rounds of play.)

The 2019 DI women’s soccer tournament kicks-off with its first round of play on Friday, Nov. 15, as 32 two-team matches will be played between the 15th and the 17th. The matches will be held at campus sites that aren’t predetermined. Winners will advance to the second round.

Second and third-round action takes place on Friday, Nov. 22, through Sunday, Nov. 24 and is located at eight non-predetermined campus locations. At each site, four teams will compete in a single-elimination second round. Each winning team will advance to the third round, where they will again play a single-elimination match. Winners of third-round games will advance to the national quarterfinals.

The quarterfinals will begin Friday, Nov. 29 and run through the 30th. They will be held at four non-predetermined school sites and winners will advance to the 2019 Division I women’s soccer College Cup.

The College Cup will be held at Avaya Stadium in San Jose, California on Friday, Dec. 6 and Sunday, Dec. 8. It will consist of the four quarterfinal winners.

Last year, Florida State took home the cup as they knocked off powerhouse North Carolina 1-0 in Cary, North Carolina. DI women’s soccer has produced four different champions over the past four years as parity continues to be a theme of a sport that was so long dominated by the Tar Heels. Below is the complete Division I women’s soccer championship history since 1982.