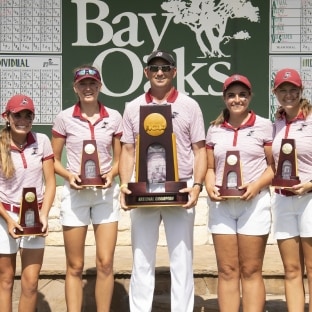 The Greyhounds of UIndy entered the day holding a 24-stroke lead following another strong showing on Friday, and they kept the momentum rolling in the fourth and final round on Saturday at Bay Oaks Country Club in Houston, Texas. The team shot a collective 2-over par on Saturday to seal the title.

As far as the individual title was concerned, unsurprisingly UIndy dominated the player leaderboard as well. Katahrina Keilich finished the tournament as the only player under par, shooting a 1-under 287 over four days to lead the entire field. Teammates Pilar Echeverria (1-over) and Kylie Raines (4-over) finished tied-second and fourth, respectively, while West Florida’s Paloma Vaccaro also tied for second.

Twelve teams, as well as the top 12 individuals from non-clinching teams (out of a total of 72 individual golfers), competed for the championship, and in the end UIndy was a clear cut above the rest this weekend.

You can relive all the action below with our updates from the DII championship from Houston: