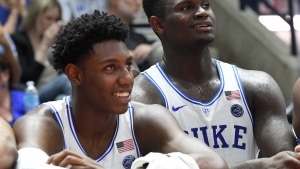 15 freshmen who can make an immediate impact in college basketball


Over the next month we’re going to be handing out some power rankings. Our first edition is  the freshmen who will have the most impact, not always the most talented (although this lot is definitely filled with high-level power), on a number of teams.

Let the debate rage on:

1. Zion Williamson, PF, Duke: Williamson is a physical specimen that isn’t seen often. He is agile and can dominate his position. He will be one of the toughest matchups for any team at any spot on the floor. Williamson has a shot to be the ACC and national player of the year if he can be a beast throughout the season.

Back on campus and swinging into O-Week like pic.twitter.com/130vkprphc

2. R.J. Barrett, SF, Duke: Yes, the Blue Devils have two of the most important freshmen in the country. Barrett could be the difference-maker for the Blue Devils with his versatility. And if this 1-2 punch can deliver on a regular basis, then don’t be surprised to see Duke mount a title campaign.

3. Nassir Little, SF, North Carolina: Little has a shot to compete with the aforementioned pair for ACC rookie/player of the year. Little can be the star that the Tar Heels have coveted of late. The Tar Heels have had loads of talent in mostly experienced, veteran players. But Little gives the Tar Heels that impactful freshmen who can be a terror from day one for opponents. Little will be the perfect partner for Luke Maye as the Tar Heels challenge near the top of the ACC.

Looking back through my Bahamas footage – Nassir Little (@2ez_nassie) does stuff like this casually in warmups (!!)

It’s going to be a fun season pic.twitter.com/24cfK1NS9I

4. Romeo Langford, SG, Indiana: Langford’s recruitment was an intense affair for all of Indiana’s faithful. Landing in Bloomington was a major coup for Archie Miller. And he could be the reason the Hoosiers are in the NCAA tournament and competing near the top of the Big Ten. The return of Juwan Morgan gives the Hoosiers an experienced, go-to player. Langford, though, can be a difference-maker that Indiana lacked last season.

Fact: Any and all talk about top newcomers must begin and end with @IndianaMBB‘s @yeahyeah_22. pic.twitter.com/d1bNXwChdi

5. Tyler Herro, SG, Kentucky: The Wildcats once again have a stellar recruiting class. Herro is the one who stood out during the summer trip to the Bahamas. If he can match his scoring prowess during the regular season, then the expectations for Kentucky could be met. Please don’t forget to book some time watching the Champions Classic on Nov. 6 on ESPN when the Duke and Kentucky freshmen will be on full display.

6. Darius Garland, PG, Vanderbilt: Garland is a stud who could have been on any other team in the country. He chose to stay home and play for the Commodores and Bryce Drew. And he has a real shot to be as impactful a freshman as any other in the SEC or beyond. Garland could be the reason Vandy makes the NCAA tournament with his ability to control the game.

7. Jahvon Quinerly, PG, Villanova: Quinerly has tough sledding ahead with major sneakers to fill on the Main Line. But he has the talent to do so and won’t have to do it alone. As Nova coach Jay Wright said on the most recent March Madness 365 podcast, the freshmen have all been very good, but none have separated themselves just yet. The hope is that Quinerly will be one of those and follow in the long line of outstanding lead guards. He has a veteran in Phil Booth to lean on early, which will help immensely.

8. Quentin Grimes, SG, Kansas: The Jayhawks have done wonders with high-profile newcomers under Bill Self. But the good news is that Grimes won’t need to be all that just yet. He has the Lawson brothers (Dedric and K.J.) and Lagerald Vick back. But Grimes will get his time to shine early and often. The talent level is full in Lawrence, and Grimes will certainly make his mark.

Take another inside look at a #KUbball summer workout with the help of assistant coach Kurtis Townsend in the newest edition of Mic’d Up. 🎤🏀 pic.twitter.com/FfzlOaaxdr

9. Jordan Brown, C, Nevada: Eric Musselman was raving about Brown signing in the spring, and with good reason. He has his big three back in Jordan Caroline and Caleb and Cody Martin. But he didn’t have a presence in the post. Now, the Wolf Pack do with Brown. Don’t be surprised to see Brown dominate his position in the Mountain West and give the Wolf Pack offense more balance with the ability to throw the ball inside.

10. Marcus Bingham Jr., PF, Michigan State: The departure of Jaren Jackson Jr. opened up even more importance for the arrival of Bingham. Nick Ward’s return means the Spartans have an experienced anchor. Kenny Goins has been a reliable rotation player, too. But Bingham has the chance to be a standout for the Spartans at a position they have done quite well in featuring under Tom Izzo.

11. Charles Bassey, C, Western Kentucky: The Bassey addition gives Rick Stansbury a player who could be at any power school in the country. That means if the Hilltoppers can reach the NCAA tournament, they can match up with any opponent at a position where schools tend to be overmatched. If Bassey can deliver on his expectations, then Western Kentucky will not only be a team to watch in its title chase with Marshall in Conference USA, but also in March.

12. Shareef O’Neal, PF, UCLA: The late add gives the Bruins a much-needed boost inside. The Bruins have plenty of pop on the perimeter in the return of Kris Wilkes and Jaylen Hands. But there was a glaring need for another frontcourt player. O’Neal, who is Shaquille O’Neal’s son, doesn’t have to be the most important player on the team, but if he can make significant contributions in spots, then the Bruins should be a legit challenger in the Pac-12.

13. Bol Bol, C, Oregon: The Ducks should return to challenging for the top of the Pac-12 with veteran returnees like Payton Pritchard and the impact of Bol in the post. Oregon has had its share of long, agile and disruptive frontcourt players. Bol should fit in quite nicely with this crew and be a force to deal with in the Pac-12. Bol Bol, the son of the late Manute Bol, will carve his own path to stardom beginning in this first year.

Future Duck Bol Bol with 22 points and 9 rebs at the @JordanClassic Will Richardson with a bucket and a couple of assists. https://t.co/tdgei1Q0lK

14. Naz Reid, PF, LSU: The Tigers have one of the most under-appreciated players in the country in Tremont Waters. And now they may have one of the more impactful freshmen classes, led by Reid. The Tigers could have the 1-2 punch of perimeter and inside scoring with the arrival of Reid. Reid is part of a loaded SEC where the race for the first-team all-SEC will be as tough to decide as the chase for the top half in the standings.

15. David Duke, G, Providence: Duke: Duke put on a show, and flushed home a ferocious dunk, on the team’s trip to Italy in August. Duke will be one of the highlights for the Friars this season. Duke is part of a highly-anticipated freshmen class for Ed Cooley. The Friars have some key returnees like Alpha Diallo and Makai Ashton-Langford, but Duke could give Cooley the problem every coach doesn’t mind — plenty of options of talented guards.

Friars are 2-0 in Italy. Win today behind 19 points from freshman David Duke.https://t.co/y0NOCxmHK2#GoFriars